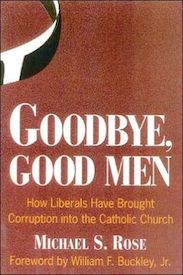 Liberals who blame celibacy for the Catholic Church’s pedophilia scandals are missing the real cause: seminaries that actively encourage homosexuality, moral laxity, and theological dissent all in the name of post-Vatican II “renewal.” In “Goodbye, Good Men,” Michael S. Rose demonstrates that such seminaries are by no means rare. All over the country, gay priests and liberal nuns energetically recruit for the priesthood gay men and others of questionable moral character – while turning away heterosexual orthodox men.

Rose fearlessly names names to tell the whole shocking story and the “Pink Palaces” of gay debauchery that many seminaries have become is just the beginning! Rose introduces you to the lesbian witch who attended classes with Catholic seminarians – in deference to whom the faculty carefully avoided mentioning the Church’s teachings on sexual morality; the seminarian who was scolded for owning a cassock and refusing to read Playboy; and the seminary administrators and novice masters who took no action against gay sexual harassment of non-gay seminarians.

Each more appalling than the last, the stories document much more than just a few isolated cases of laxity: they betray a deeply rooted agenda by gays and dissenters to do nothing less than take over the Church. To do so, they’ve created the Church’s “priest shortage” by running serious Catholics out of the seminaries – leaving only deviants.

Nor is this problem restricted to Catholics! The assault on Christian orthodoxy and masculine authority – as well as the aggressive promotion of the gay agenda – that Rose documents in this book are proceeding apace in Protestant denominations too. That makes Goodbye, Good Men essential reading not only for Catholics who want to save their Church, but for everyone who wants to defend Christianity from assault by those who would subvert its message from within. A few of the appalling facts that Michael Rose reveals:

“Anyone, Catholic or non-Catholic, who wants to understand the causes of the current scandals in the Church couldn’t find a better explanation than that contained within the pages of Goodbye, Good Men.” — Phil Brennan, Newsmax.com

“American Catholics have been left reeling by recent clergy sex scandals, and have wondered how things could have gotten so bad. Goodbye, Good Men has the shocking answers. Rose presents evidence that the destruction of the Catholicism in America has primarily been an inside job carried out by unchaste gay priests, feminist nuns and theological dissenters in control of the institutional Church — and he names names. Goodbye, Good Men could not have come at a better time for the American Church which is in desperate need of authentic reform. At last, someone has written the blockbuster book orthodox Catholics have been hoping and praying for.” — Rod Dreher, National Review

“Goodbye, Good Men investigates the training of priests over the past decades and shows how a shortage has been artificially created by keeping good candidates our and admitting effete and unorthodox ones. The scandals of homosexual priests and bishops now testing the faith and loyalty of American Catholics have their origin in the situation Rose describes in the this book. I would recommend it to all bishops, but any bishop unaware of what Rose has written is guilty of culpable ignorance.” — Ralph McInerny, Professor of Philosophy, University of Notre Dame, and author of What Went Wrong with Vatican II

“Michael S. Rose has put his finger on the dark secret behind the vocations crisis: it is ‘artificial and contrived.'” — E. Michael Jones, Ph.D., author, Libido Dominandi

“This book holds the key to a phenomenon which, to many, is also an enigma: Why are so many seminaries empty?.” — Alice von Hildebrand, Ph.D., author, Soul of a Lion

“This book is not to be missed by anyone who cares about the Catholic faith.” — Donna Steichen, author, Ungodly Rage: The Hidden Face of Catholic Feminism

“For those of us who were in seminaries in the 1970s and the 1980s, this book has a sure and certain ring of truth to it. Anyone who is appalled by the current scandals in the priesthood, anyone who has been saddened for years by the visible weakening of the vigor of the Catholic Church in our country, will find in Michael S. Rose’s careful prose an important part of the answer to the question, ‘How can these things be?’ The tale Rose tells in his book is unbelievable — but it is true.” — Reverend Joseph F. Wilson, Diocese of Brooklyn

“Few books in the past thirty years have shed more light on the continuing crisis in the Catholic Church.” — James Hitchcock, Professor of History, St. Louis University