Conservative Book Club » Economics & Free Markets » Government Bullies: How Everyday Americans Are Being Harassed, Abused, and Imprisoned by the Feds

Government Bullies: How Everyday Americans Are Being Harassed, Abused, and Imprisoned by the Feds 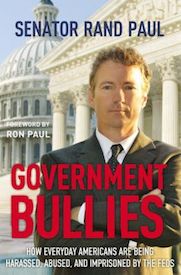 This Rand Paul guy moves, I tell you: a book on the Tea Party last year; a satchel full of so-far vainly introduced legislation, with fetching titles such as the Freedom From Over-Criminalization and Unjust Seizures (FOCUS) Act; and this new book, bubbling with righteous indignation.

The energy that buoys and characterizes Kentucky’s Republican junior senator proceeds, no doubt, from stories like those that overflow, hot as a pistol, and smoking, from “Government Bullies.” What the title says, Mr. Paul very much means — to wit, that “every day our government behaves as [if] it has no limits on its power” and “our federal government and its many tentacle agencies have become the enemy of the people as much [as] if not more than they have been public servants.”

He’ll gladly show you why if you can spare him a couple of hours. There are the stories of landowners raided, prosecuted and sentenced to prison for allegedly despoiling federally protected “wetlands.” There’s the storied Gibson guitar firm, harassed for “breaking a law that says that Indian wood products must be ‘improved’ before being exported” — “improved” according to elusive Indian standards.

Ask Mr. Paul about the Transportation Security Administration. Or, rather, don’t ask if you want a short, cool reply. A senator hassled by TSA at the airport and, equally to the point, well-informed concerning the agency’s violations of customer dignity, would get back at the agency through the Air Traveler’s Bill of Rights, allowing, among other things, traveler “opt-outs” for airports. “How the TSA Terrorizes American Citizens” is the senator’s evocative title for that particular chapter in the book.

A particularly big point with Mr. Paul, given the space he accords the matter, is the Environmental Protection Agency’s zeal for protecting “wetlands” against landowners desirous of improving their property. “Property owners,” he contends, “are not subject to simple rule of law, but rather are constantly at the mercy of a government agency that makes its own laws, often without rhyme, reason, common sense, or oversight.” He tells several chilling tales of innocent — by the common definition of innocent — owners fined and imprisoned for failing to understand what the EPA meant or wanted them to do.

Much of the problem that government poses to property rights has to do, by Mr. Paul’s reckoning, with regulations written vaguely by Congress before being interpreted with arbitrary precision by regulators and other bureaucrats.

Mr. Paul has a foreign policy as well. It is to keep foreign countries from imprisoning American citizens with whatever hand isn’t being used to deposit and arrange grants of U.S. aid. He reminds readers that Egypt — some of whose more demonstrative citizens appear to dislike U.S. concepts of free speech — last year arrested several U.S. citizens on trumped-up charges of working for democracy. Mr. Paul offered an amendment to freeze U.S. aid to Egypt. The amendment got nowhere at the time, but it may soon, in view of recent events, start to look better. As Mr. Paul told his colleagues: “America has lavished over $60 billion on the government of Egypt, and they react with insolence and disregard by detaining nineteen of our U.S. citizens.”

Mr. Paul’s better-known father, Ron, has sought the presidency as a libertarian. The younger Mr. Paul’s attachments are clearly libertarian in the philosophical, if not the purely partisan sense. He wants government kept to a minimum. The stories he tells are illustrations of what happens when government seeks to direct and channel life as opposed to just protecting it from predators of every sort, including the bureaucratic.

“Government Bullies” lacks a view from two miles up of the ways and contexts in which modern government came to dominate modern life — telling people how to use their land, care for their health, raise their children and so on. The result is war by anecdote. Mr. Paul tells a story, boos the villains and cheers the heroes and heroines. He never really ties things together with any artistry. “Government Bullies” is more political barrage than academic rendering. This is helpful in terms of introducing readers to a viewpoint the author embraces with a fervor not frequently seen in junior senators.

Oh, yes — there was that junior senator from Illinois, four or five years ago, the one we elected president. He had all kinds of fervor of one kind and another. Come to think of it, on that senator’s presidential watch have occurred many of the scandalous stories Mr. Paul relates. A sensible Washington hostess won’t wish to seat these two gentlemen side by side anytime soon.

Book Review from The Washington Times, by William Murchison