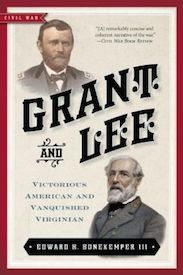 Grant and Lee: Victorious American and Vanquished Virginian is a comprehensive, multi-theater, war-long comparison of the command skills of Ulysses S. Grant and Robert E. Lee. Written by Edward H. Bonekemper III, Grant and Lee clarifies the impact both generals had on the outcome of the Civil War—namely, the assistance that Lee provided to Grant by Lee’s excessive casualties in Virginia, the consequent drain of Confederate resources from Grant’s battlefronts, and Lee’s refusal and delay of reinforcements to the combat areas where Grant was operating. The reader will be left astounded by the level of aggression both generals employed to secure victory for their respective causes, as Bonekemper demonstrates that Grant was a national general whose tactics were consistent with acheiving Union victory, whereas Lee’s own priorities constantly undermined the Confederacy’s chances of winning the war.

Building on detailed accounts of both generals’ major campaigns and battles, this book provides a detailed comparison of the primary military and personal traits of the two men. That analysis supports the preface discussion and the chapter-by-chapter conclusions that Grant did what the North needed to do to win the war: be aggressive, eliminate enemy armies, and do so with minimal casualties (154,000), while Lee was too offensive for the undermanned Confederacy, suffered intolerable casualties (209,000), and allowed his obsession with the Commonwealth of Virginia to obscure the broader interests of the Confederacy. In addition, readers will find interest in the 18 highly detailed and revealing battle maps, as well as in a comprehensive set of appendices that describes the casualties incurred by each army, battle by battle.