Conservative Book Club » Biographies & Memoirs » The Hand of God: A Journey from Death to Life by The Abortion Doctor Who Changed His Mind

The Hand of God: A Journey from Death to Life by The Abortion Doctor Who Changed His Mind 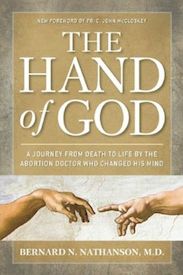 As the former director of the world’s largest abortion clinic and the nation’s most prominent abortionist, Dr. Bernard Nathanson presided over 61,000 abortions—one of which was suffered by his then-girlfriend. He had helped to legalize abortion in the first place.  As co-founder of the National Abortion Rights Action League he helped make abortion legal.

In the most shocking revelations ever expressed in an autobiography, one man unveils his entire life story, detailing countless events—from his gruesome abortion procedures to his conversion and involvement in The Silent Scream.  But Dr. Nathanson’s journey was not over. In this deeply personal memoir, he reveals what led a lifelong atheist and abortion crusader first to the pro-life cause, and finally to Christianity.  Discover one man’s incredible journey from death to life.

The Hand of God is more than one of the most dramatic autobiographies of our time. It is also a definitive explanation of the pro-life positions not only on abortion, but on related issues such as fetal tissue research and doctor-assisted suicide. “I know the abortion issue as perhaps no one else does,” writes Nathanson. Even those as committed to legal abortion as he once was will find his arguments challenging and his story unforgettable. The book features and introduction by Reverend C.J. McCloskey, III.