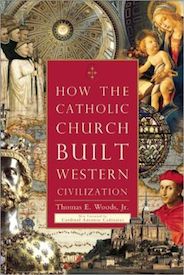 Ask a college student today what he knows about the Catholic Church, and his answer might come down to one word: “corruption.” But according to Thomas E. Woods, Jr., that one word should be “civilization.” In “How the Catholic Church Built Western Civilization,” Professor Woods shows how the Catholic Church has shaped our civilization to a far greater degree than most people — Catholics included — have been taught. “To be sure, most people recognize the influence of the Church in music, art, and architecture,” writes Woods (author of the New York Times bestseller The Politically Incorrect Guide to American History). But her influence goes far beyond that. In fact, he reveals, the Church’s imprint can be found on every major achievement and institution of the West — from science and economics, to international law and “just war” theory, to the university system and organized charity.

And, because Woods focuses primarily on the pre-Reformation medieval period, Protestants no less than Catholics should be cheered by this vigorous defense of their common patrimony.

In How the Catholic Church Built Western Civilization, you’ll learn:

“Engaging and engrossing, How the Catholic Church Built Western Civilization is a mine of information and a stimulus for reflection on the debt we owe to Catholic life and thought.” — Michael P. Foley, Ph.D., assistant professor of Patristics, Great Texts Program, Baylor University

“Dr. Woods’s book is a superb and scholarly refutation of the widespread and deeply rooted prejudice that the supernatural outlook of the Roman Catholic Church disqualifies Her to make any valuable contribution to the ‘progress’ of humanity. This book is a magnificent illustration of Christ’s saying: ‘Seek ye first the Kingdom of God and His justice; the rest will be added unto.’ Whether we turn to science, legal questions, economics, education, scholarship, fine arts, Dr. Woods shows convincingly the fecundity of a supernatural approach to life. This book is highly recommended.” — Dr. Alice von Hildebrand, professor emeritus, the City University of New York

“Professor Thomas Woods has put the Catholic Church squarely back where it should be: at the center of the development of the values, ideas, science, laws, and institutions which constitute what we call Western civilization. I recommend Professor Woods’s book not only to anyone interested in the history of the Catholic Church, but also to any student of the history and development of Western civilization.” — Dr. Paul Legutko, Stanford University