Bias in the Booth: An Insider Exposes How the Sports Media Distort the News 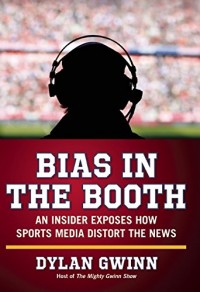 “Can’t I just enjoy a game for once?”  This is a question many sports fans have asked themselves more than a few times in recent years.  Sports are meant to be an escape from our often chaotic and hectic lives.  We should be able to turn on a game or watch the nightly highlight reels as a diversion from the more serious aspects of modern life.  Sports are entertainment, or at least they used to be.

Increasingly, the sporting world, or at least the reporting of the sporting world, has been hijacked by liberal “journalists” furthering a particular narrative.  This is the argument sports radio host Dylan Gwinn asserts in his book Bias in the Booth: An Insider Exposes How Sports Media Distort the News.  Where once the evening sports anchor contained himself to home runs and touchdowns, he now tries to out-do his news colleagues in political commentary.

Bias in the Booth walks the reader through years of decline in sports journalism to its current state of social commentary and liberal hectoring.  In such a state, the actual sports seem to fade into the background.  Mr. Gwinn correctly attributes this phenomena to the insecurities of sportscasters.

“Many sports reporters and commentators recognize that they deal in trivialities, and yet they want to make a bigger impact on society, they want to feel more important,they want to inflate their egos by lecturing you, and as a consequence they often do their real jobs not very well.”

An ESPN anchor droning on about Rush Limbaugh’s accurate description of the media propping up Donovan McNabb stems from the exact same impulse which impels many Hollywood actors to harangue us about global warming.  They know their real jobs lack substance so they seek to make up for that deficiency by speaking out on hot-button political issues.

None of this should really surprise anyone.  Sports reporters share a common origin with their news counterparts.  They all attended the same journalism schools where they learned good journalism equals activism.  But whereas news anchors benefit from the serious reputation of their profession, sports journalists of similar beliefs must be even more vehement in their liberal activism to prove themselves as serious individuals.

This book reads very much like a good sports radio broadcast.  It pulls no punches, is slightly irreverent at times, delivers a few laughs, and above all is highly entertaining.  Mr. Gwinn does occasionally stray from his central message and offers his own commentary on a few of the political issues overshadowing the sports world.  This serves to undermine his argument slightly.  On the whole though, Bias in the Booth is comprehensive in detailing just how much liberalism has infected yet one more realm which should be free of politics.

Written by Daniel Grazier, a former television reporter with years spent in newsrooms around the country.