In Praise of Prejudice 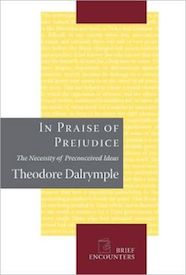 Prejudice: it’s America’s national trauma. To call someone prejudiced is to declare that he is outside the limits of polite society, and should be consigned to the outer darkness where only Klansmen and neo-Nazis dwell. But in reality, as the English psychiatrist and writer Theodore Dalrymple argues in this brisk and bracing book, “In Praise of Prejudice,” prejudice isn’t just name-calling and stereotyping of racial groups (though it may certainly include that). He explodes the common assumption that prejudice is wrong, so lack of prejudice is right, and establishes that no one is free of prejudice: one prejudice will always be replaced by another. Those who claim they are free of it, he says, are mired in intellectual, moral and emotional dishonesty.

Dalrymple establishes that someone who walks out into the world completely unprejudiced is as helpless as a newborn babe. He details the cruel effect of not instilling the right prejudices, and elucidates why prejudice itself is a good thing — a necessary foundation of intellectual, social and moral life. Prejudice is even, he demonstrates, essential to a well-functioning family life.

Prejudice, Dalrymple explains, is at the root not only of a lot of vice, but of most virtue. It is a prerequisite of sound moral judgment: to expect people to work out all their morals for themselves from abstract first principles is to expect far too much from them. It is not only unrealistic, it is harmful. Dalrymple speaks from extensive clinical experience as a doctor in a slum hospital and the prison next door — where he has seen that the pretence that we can be totally unprejudiced is a pretext for licentiousness and lack of self-control, to the detriment not only of individuals but of society as a whole.

In Praise of Prejudice will destroy your prejudice against prejudice: