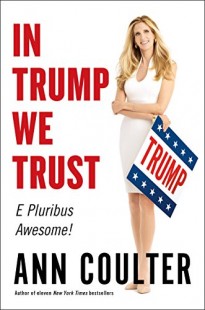 Before this election, many conservatives felt lost — that the system was rigged, and that the losses on key issues were all but permanent. But then, as Ann Coulter capably describes, came one Donald J. Trump.

Coulter, a conservative firebrand par excellence, has become as associated with the nascent ideas of Trump and his supporters as Breitbart. This new book serves as her idea of what Trump represents from the battlefields of culture and immigration to the negotiation rooms of trade deals and foreign policy. She rejects not only the temporarily triumphant liberals, but the GOP establishment as well. The backcover encapsulates her message, quoting from the book that

“One would search the history books in vain to find a party establishment so emphatically rejected by the voters as the Republican Party was in 2016. They want to keep the country. They want Trump”

This key phrase, “keep the country”, proves to be the heart of Coulter and Trump’s conservative message. The book itself, however, is not laid out on issues but rather as a chronology of Trump’s campaign thus far, beginning on June 26, 2015 (the start of Trump’s campaign) and continuing up to the end of the primaries. I thought it was a very creative way of framing the book — recapping his campaign provides structure and familiarity to conservatives and Americans who have followed him along his path to the presidency.

As Coulter touches upon both Trump’s campaigning and events like the San Bernardino shootings, she elaborates on Trump’s appeal to average folks, focusing on his style and, of course, his message. Fans of Coulter will recognize her own style, especially when she is on the attack against establishment Republicans and others who transgress the Trump train.

The end of the book cleverly features an appendix of various wonks, experts and pundits proclaiming, at many points over the campaign season, that Trump couldn’t win the nomination. Coulter doesn’t comment on these individual predictions — their presence stands as a perfect contrast both to the book and to reality. I particularly liked this section, in part because it doesn’t need invective to rip into its subjects — they are made into buffoons not by Coulter’s words, but through their own.

Coulter wrote this book with the zeal of a convert, and as you read it, it becomes apparent that this is less a deep read into Trump’s overall philosophy and more the hagiography of a movement that has just been born. Those of you who are eager passengers on the Trump train will love this book; those with some doubts about Trump may be left wanting more than chronology and Coulter’s convictions.

This isn’t to say that the book doesn’t make arguments; Coulter explains the emotional and political beliefs that make restricting immigration such a powerful message for Trump, among other things. But overall, from the first page to the appendix of very bad “expert” predictions, it is clear that Coulter wants to focus more on tearing down establishment and media critics.

People who want a breezier read will also enjoy this; by eschewing philosophy, Coulter is free to write in her classic confrontational style, accessible to all audiences. The book is also fairly short, which makes it a perfect book for this last bit of summer. If you want an enjoyable trip down recent-memory lane, with explanations of Trump’s success and dissections of how Trump took down the elites, In Trump We Trust is absolutely the book for you.