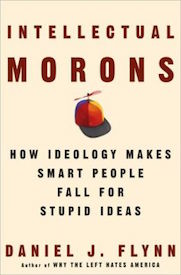 Why do well-educated antiwar activists argue that the U.S. government orchestrated the September 11 attacks, and is on the way to replicating the horrors of Nazi Germany? How can Al Gore really believe that cars pose “a mortal threat to the security of every nations”? How can Yale professor Lamont Cole assert with a straight face that “to feed a starving child is to exacerbate the world population problem”? Why does the Princeton professor known as the father of the animal rights movement object to humans eating animals but not to humans having sex with them — and why does PETA defend that position?

It is startling how many Americans — and particularly how many among the Leftist media, academic, and political elites — fall for cockamamie ideas that a child can see through. The trouble is, their lies become institutionalized as truth, and we all suffer as a result. Why are liberals such easy prey for stupid ideas? Daniel J. Flynn reveals the answer in “Intellectual Morons.”

Flynn, author of “Why the Left Hates America,” shows how people (mostly Leftists, but also a few on the Right) can be so blinded to reality by the causes they serve that they espouse bizarre, sometimes ridiculous, and often dangerous positions. Even the most influential social movements have spawned ideologues who don’t care whether an idea is good or bad, true or false — but only whether it can serve their cause.

In Intellectual Morons, Flynn catalogues an amazing number of jaw-dropping lapses in common sense from even our most celebrated liberal opinion leaders. This book is a welcome reality check for the glaring excesses of what passes today for intellectual analysis among Leftists.

Stupid ideas put forth by liars, hypocrites, and perverts — and their harmful consequences: