It IS About Islam: Exposing the Truth About ISIS, Al Qaeda, Iran, and the Caliphate 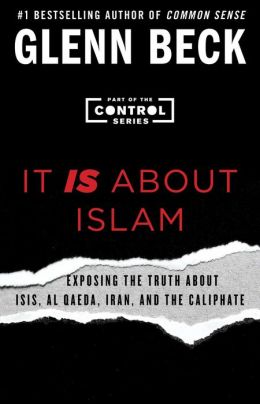 Since the harrowing events of September 11, 2001, much has been written and said about terrorism in the modern world. Why did this happen? Who is responsible? How do we respond? These conversations were often heated, confusing, and most of the time clouded with misinformation and politically correct jargon.

In Glenn Beck’s It IS About Islam, the author attempts to clear away much of the confusion and politically correct clichés still at the center of these debates so many years later. Beck begins with a relatively succinct but effective look back at the history of Islam and its attempts, almost always through force, to spread its influence throughout the Middle East, Africa, and parts of Europe.

We begin to get a sense of the origin of an ideology that inspires modern day terrorists to commit heinous acts in the name of religion. The book spends ample time on the events in the Middle East after the fall of the Ottoman Empire, specifically the conditions that led to the fall of the Ottoman caliphate, the rise of the Muslim Brotherhood, and the long-term goal of reestablishing a central religious ruler. Beck argues, as do many other historians, that this period in the early 20th century sparked the long march of terrorism through ensuing decades, ultimately bringing us the likes of Al Qaeda, Boko Haram, and ISIS.

Important, however, to any historical examination of religion is the concept of theocracy, the often oppressive coupling of divine laws with the coercive power of the state. Religion entangled with politics, to most Americans, is a foreign concept that runs counter to the basic principles of the Constitution and Bill of Rights. Very early in the book, Beck gives the reader a peek into the founding of America and the philosophy of Thomas Jefferson, including his ideas regarding the separation of church and state. Although a radical idea at the time, this principle became the cornerstone of religious freedom in the United States. Beck makes clear in his argument that, as other world religions reformed to accept and embrace the division of the sacred and secular, Islam has remained coercive, using the teeth of the state to establish and sustain theocratic societies in a modern world.

Central to Beck’s approach in this book is the systematic dismantling of over a dozen common arguments made to decouple terrorist attacks from the basic tenets of Islam. While the author makes clear that millions of Muslims around the world live peacefully in a secular society, he quickly debunks the argument that modern day terror activity is the result of a perversion of the Islamic faith. With carefully placed quotes from both the Quran and Hadith [Islamic jurisprudence], he exposes the very language that motivates those who kill in the name of Allah. In the spirit of fairness, Beck makes it clear that other religions throughout history, including the Catholic Church during its reign in Europe, used similar tactics to propagate their faith by forced conversion.

However, central to any comparison between Christianity and Islam is understanding the separate paths of history each faith followed. Challenges to the Catholic Church were followed by an extended period of religious strife in Europe. The tumult of the European wars of religion ushered in significant reforms in government and in the faith, ultimately shaping the ideas of religious freedom and secular governance. Beck argues that Islam has made no such reform and continues to operate in many parts of the world on outdated models of religious coercion through the power of the state.

Another nuance that is often missing in these debates is the fact that tens of millions of peaceful Muslims have suffered at the hands of Islamic terrorists. Beck exposes the rift between the Shia and Sunni Muslims and the years of bloody conflict between the two sects. In addition, the summer of 2015 has seen a flood of Muslim refugees coming out of Syria to escape the brutal conditions in that war-torn country. In many ways, this battle for religious domination is not necessarily one faith against all the others, but, more accurately, Islamic purists using violence against anyone, Muslim or otherwise, that they see as an apostate.

As the civilized world looks for answers to the growing problem of Islamic terrorism in the modern age, some argue that the root of this conflict includes a “clash of civilizations”, most often defined as the intersection of one forward-moving culture against another. In It IS About Islam, it becomes clear that this is an inaccurate description, arguing instead that the tenets of Islam, as understood by millions of adherents to the faith, require a bulwark to blunt the advances of religious reform and modernity.

In the final section of the book, Beck attempts to show the way forward. He argues that effective solutions to combat Al Qaeda, ISIS, and others, must begin with an unvarnished examination of the Islamic faith, as well as by cultivating partnerships with peaceful and forward-thinking Muslims working to bring about reform. While crafting these solutions may seem impossibly complex, investigating the truth about Islam, as Beck does in this book, is a critical first step on the long journey to eradicate Muslim terrorism worldwide.
Original CBC review by Bob Macioci.

Tags: Bestsellers, Glenn Beck, Islam, It IS About Islam