Killing Reagan: The Violent Assault that Changed a Presidency 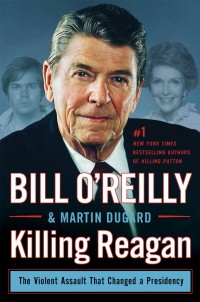 26 years after he left office, Ronald Reagan is still honored by conservatives as more than just another President. He brought an end to the Soviet Empire, ended Carter-era stagflation, and helped bring the Moral Majority into the forefront of American politics.  Reagan remains the greatest idol of the conservative movement, the man who translated decades of political theory and writing into political success — the leader who brought a new morning to America.

Needless to say, writing about him brings with it that mythos, and the expectations that come with it. Is Bill O’Reilly up to the task?

O’Reilly is back again with a new book in his Killing history series: Killing Reagan: The Violent Assault That Changed A Presidency. The book acts as both a tribute to President Reagan and as an exploration of how John Hinckley’s assassination attempt changed both Reagan’s presidency and the country as a whole.

Fans of O’Reilly’s history work, or fans of pulp history books in general, will enjoy his latest offering. From Reagan’s work in the 1950s to John Hinckley’s slow descent into madness, O’Reilly and his co-author, Martin Dugard, compress history into an understandable and enjoyable form.

People who want a detailed overview of Reagan’s life, however, may be disappointed. National Review and some other critics have been critical on how Reagan is portrayed. In particular, they disagree with how Nancy Reagan is depicted, as a strong, almost overbearing influence on Reagan’s decision-making process.

In chapter 7, for example, O’Reilly writes “While still technically a Democrat, Reagan has been heavily influenced by the more conservative views espoused by his wife, Nancy, who grew up in an extremely Republican house hold and likes to brag that she has been reading the right- leaning National Review since its first issue.” The suggestion that Nancy was the main driving force behind Reagan’s rightward shift, as opposed to people like Barry Goldwater or President Nixon, may rankle some readers.

This theme of Nancy’s dominance will continue throughout the book. After the assassination, the authors write that “He delegates much power to Nancy. Occasionally, he avoids the Oval Office altogether, spending hours during the day watching television reruns in the upstairs residence. Even more troubling, it is no longer given that the president will take the time to read important policy papers”, which brings to mind images of Edith Wilson, and further suggestions of Ronald Reagan’s supposed passivity.

O’Reilly and others have argued that they show Reagan not as the unimpeachable symbol conservatives have made of him, but rather as a man with flaws and nuances, understandably affected by being nearly assassinated. In suffering, they say, Reagan still triumphed, rising above the shooting to become one of America’s greatest Presidents.

Like with Reagan’s legacy itself, how readers view this book will largely hinge on their expectations going in. Those who want an enjoyable read into history, with familiar touchstones in popular culture and the events of the 1950s-1990s, will probably be happy with what they read.

As always, the reader’s mileage may vary.