Korean Dream: A Vision for a Unified Korea 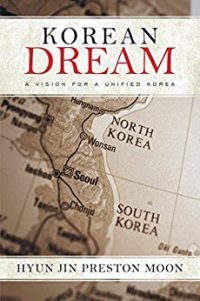 Is a Unified Korean Peninsula Within Reach?

For as long as the Korean peninsula has been divided, there have been those calling for unification. But as the north and south have further divided themselves along economic, political and ideological lines following the end of the Korean Civil War, these voices have been largely drowned out.

Hyun Jin Preston Moon is among those that have never given up hope. A Korean educated in the US, Moon founded the Global Peace Foundation, which has advanced Korean unification scholarship, economic and civic solutions. In his latest book titled, Korean Dream – A Vision for a Unified Korea, Moon lays out a compelling case why Korean reunification is entirely possible.

What makes this book particularly intriguing is that you can see a number of themes emerge that harken back to America’s founding grounded in the idea of fashioning a country based not on geography, religion or even ethnicity, but by a shared set of ideas and values. This seems extraordinary considering that Koreans are an ethnic group with a distinct language and culture, but for Moon, being a Korean is also about an ethos of living “for the benefit of all humanity” embodied in the ancient, traditional Korea values of “hongik ingan.” This idea has played a role in Korean history, Moon suggests, similar to that of the Declaration of Independence in American history, particularly during the independence struggle against the Japanese.

While the situation in the peninsula remains tense, there are signs that the moment is ripe for massive change. For one, consider the recent presidential elections in South Korea that indicate that the new president is eager to reconsider their current policy towards the belligerent North. The number of high-level North Korean government defections is rising – surprising even long-time Korean experts that are wondering if the end is near for the Hermit Kingdom as know it.

Besides ramping up sanctions and further isolating North Korea, reunification is emerging as an important piece in bringing about peace on the peninsula. Moon is not the only one advancing this idea. John Bolton, the prominent national security and foreign policy expert and a scholar at the American Enterprise Institute, has also written about this in the past.

But what sets Moon’s approach different from others is that he steps past the ideological politics of a divided Korea by appealing to a historic Korean identity. Additionally Moon is also calling for moving the issue beyond international diplomacy to include the Korean people through a movement of civil society organizations. In short, Koreans must have ownership in any change on the peninsula.

Similarly a change in personnel in Washington, D.C. has also meant that North Korea is now contending with a United States that is not ruling out the possibility of a military confrontation. With a highly unpredictable leader like Kim Jong Un, anything is possible, but for all their military prowess, North Korea lacks the technological capabilities needed to prevail in conventional warfare. Kim Jong Un knows this which begs the question, what happens if the United States calls North Korea’s bluff?

To be sure, the North Korean government is reckless, immoral and irrational. It seems likely that even the most persuasive argument and plan for reunification would fall on deaf ears. But what about the North Korean people?

This is where Hyun Jin Preston Moon is hoping his ideas will really resonate. After all, there is ample evidence to suggest that life for most North Koreans is difficult. Child malnutrition is rampant with many families struggling to get by, not to mention the systematic human rights abuses gruesomely documented in the 2014 UN Commission of Inquiry report.

If the people of North Korea were ever thinking of defecting, an argument appealing to a shared history of thousands of years might be most persuasive than a Western-led movement. To make his case, Moon writes about the great warrior and founder of the Mongol Empire, Genghis Khan, who is revered in many parts of Asia, including North and South Korea. Known primarily for his fierceness on the battlefield, Khan was also a visionary who said that “ If one person has a dream, it is just a dream, but if all people have that dream, it becomes a reality.”

That dream, according to Moon,is for all people to live in one world under one heaven. War and conflict are necessary evils, but mankind should ultimately aspire for peace and harmony.

This is the crux of The Korean Dream of unification articulated in the opening pages:

The Korean peninsula is at a crossroads. One path leads to conflict of massive destruction in the scale we cannot even begin to comprehend, while the other provides a hope for a mostly peaceful transition not unlike what we saw after the collapse of the Soviet Union. For the sake of all humanity, let us hope that it is the latter.

Israel Ortega is a Contributor to The Examiner, The Hill and Conservative Book Club. You can follow him on Twitter: @IzzyOrtega