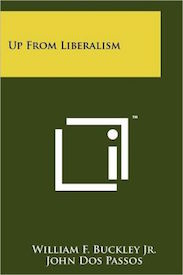 The author of God and Man at Yale, co-author of McCarthy and His Enemies and one of the most articulate spokesmen for the Right, attempts here to discredit “doctrinaire Liberalism and plead the viability of enlightened conservatism”.

In his examination of the economic and political assumptions of Liberalism, much of what the author discusses surrounds the McCarthy phenomena but he claims that he is not weighing the worth of the controversies he describes, merely the behavior of prominent Liberals caught up in them in order to demonstrate liberal intellectual and moral irresponsibility.

Who are the Liberals? “Those men and women who tend to believe that social progress is predictable…that truths are transitory and empirically determined…that equality is desirable and attainable through the action of state power…” Some typical Liberal public figures and institutions? Eleanor Roosevelt, James Wechsler, Arthur Schlesinger Jr., Adlai Stevenson, the New Republic, St. Louis Post Dispatch, New York Post, most of the N.Y. Times.

In dealing with such questions as: the legality of enforced desegregation, the activities of congressional committees, academic freedom, conformity on campus and various ramifications of the Welfare State, Buckley admits that the conservative position has not been adequately demonstrated and he indicts Old Guard Republicanism for its irrelevancy and Modern Republicanism for its pseudo-Liberalism.

In the area of the controversial Buckley’s intellectual agility and facility for impaling logical fallacy has already been established as provoking and/or provocative.