Liberalism Is a Mental Disorder 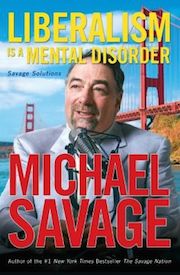 With grit, guts, and gusto, Michael Savage has made his talk show “The Savage Nation” a must-hear by fearlessly telling it like it is. Night after night, Savage savages today’s rabid liberalism with verve and precision, speaking truths that other public figures are too politically correct or afraid to say. In his new book, “Liberalism Is a Mental Disorder,” he lays it on the line: “You will not have a nation,” he says, “unless you awaken to the reality that America has become pacified; America has become feminized; and America is being compromised from without and within. You cannot let them get away with this. Can America be saved? Is it too late? I believe that with God’s will and with your determination to confront the mental disorder of liberalism whenever and wherever it is found, America can both survive and thrive.” In this book, he shows how.

In this third installment of his bold, biting, and bestselling trilogy, Savage offers provocative and practical ways to reclaim our social, political, and cultural integrity. Through a compelling narrative of current trends and events, Savage chronicles the continued assault on the sacred pillars of American life (the U.S. Constitution, the Bill of Rights, the Ten Commandments, the Sanctity of Marriage) by the High Priests of Ultra-Liberalism. In each chapter, the Savage Spotlight of Truth casts its brilliant light on the tactics used by liberals to spread their leftist agenda. Savage follows his analysis with specific actions, arguments, and recommendations for action that the reader can ingest to counter the radical left.

Savage has long insisted that America’s best days are in front of her — if only we have the guts to face the truth and apply ourselves to repairing the foundation upon which this blessed nation was formed. The doctor is in and the diagnosis is clear: in Liberalism Is a Mental Disorder, Michael Savage provides a remedy to help freedom-loving Americans effectively medicate the mental disease of modern liberalism and restore America’s former brilliance.

Modern liberalism: “made in much the same way as a sausage — it’s a blend of fascist, Communist, and socialist ideologies from twentieth century Europe, with a pinch of Nazism, all ground together, yet retaining the flavor of its various parts”

Homeland security: “We need more Pattons and less patent leather . . . Real homeland security begins when we arrest, interrogate, jail or deport known operatives within our own borders . . . One dirty bomb can ruin your whole day”

Iraq’s future: “Iraq cannot become a melting pot as long as it insists on a national religion — especially when that religion is Islam which . . . has zero tolerance for those with nonconforming views”

The National Lawyers Guild and MoveOn.org: “I believe it’s time for the heads of . . . left-wing agitation groups who are using the courts to impose their will on the sheeple to be prosecuted under the federal RICO statutes”

The ACLU: “The head of the snake is the American Civil Liberties Union, which fashions itself as the de facto fourth branch of government”

Illegal immigration: “I envision an Oil for Illegals program . . . the President should demand one barrel of oil from Mexico for every illegal alien that sneaks into our country”

Madonna and her newfound spirituality: “Here’s a woman who made a career as a pseudo-pornographic belly dancer cavorting with a whip, and now suddenly after having a baby she pretends to be a holy woman”

Lawsuit abuse: “Pass tort reform now. . . . Lawyers are like red wine. Everything in moderation. Today we have far too many lawyers, and we’re suffering from cirrhosis of the economy”

Gay activism masquerading as civil rights: “Somehow I can’t picture Martin Luther King, Jr., marching in makeup and a miniskirt to hold a vigil at the state capital for the rights of drag queens”

Why patriotic Democrats should leave the party: “As they are pulled farther in by the fringe soothsayers and the Pied Pipers of the Democrat Party, they become gulled into believing in the lessening or dissolution of America’s sovereignty and in embracing an allegiance to ‘European’ (i.e. socialist) concepts”

Our porous borders: “Any nation who refuses to control her borders is not just suffering from a mental disorder, they’re tip-toeing at the ledge of a skyscraper”

Rousing the sleeping giant: “The 9/11 attack on America by the Islamofascists . . . may eventually be seen as the turning point where America breaks free of the chains of socialist oppression”

Plus: a devastating SavageSpeak Glossary!