The Making of Modern Economics 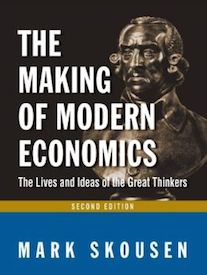 The man who first called economics “the dismal science” obviously never read this history of the discipline by Mark Skousen. Previous histories tend to give a dry and disjointed account of economists and their contradictory theories. But Skousen — a free-market economist himself — unifies the story by casting it as the dramatic struggle of free-market capitalism against Keynesianism, Marxism, socialism, and other “-isms”.

This is an account of high drama with a singular heroic figure, Adam Smith, at the center. Skousen shows how Karl Marx, Thorstein Veblen, John Maynard Keynes, and even laissez-faire disciples such as Robert Malthus and David Ricardo detracted from Smith’s “system of natural liberty” — while others including Alfred Marshall, Ludwig von Mises, Friedrich Hayek, and Milton Friedman elaborated and improved upon Smithian economics. Along the way, Skousen offers a full-scale review and critique of every major school and their theories, including classical, Keynesian, monetary, Austrian, institutionalist, and Marxist economics.

Best of all, Skousen brings history alive with revealing anecdotes about the great economists, including:

Tags: Mark Skousen, The Making of Modern Economics: The Lives and Ideas of the Great Thinkers