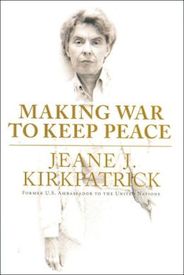 How we comprehend evil determines the logic of our approach to foreign policy: so says the late Jeane J. Kirkpatrick, who for decades was a voice of toughness and resolve on questions of American engagement overseas. In “Making War to Keep Peace,” completed just before her recent death, the one-time national security adviser to Ronald Reagan and U.S. Ambassador to the UN takes stock of the past two decades in U.S. foreign policy, assessing both our successes and our failures. Blending recent history with unflinching critique, Mrs. Kirkpatrick traces from an insider’s perspective the turbulent and underexamined period from George H. W. Bush’s fledgling New World Order through today’s war on terrorism and beyond.

Since the end of the Cold War, Kirkpatrick argues, America’s relationship with the U.N. has fractured, marred by mutual distrust, competing agendas, and continuing uncertainty over US involvement in conflicts among rogue nations overseas. Here, she offers a tightly observed chronicle of the result: a period that has found the United States called upon to use force around the world–to mixed and often challenging results.

Tracing the course of diplomatic initiatives and armed conflict in Iraq, Somalia, Haiti, Bosnia, and Kosovo, she illuminates the shift from the first Bush Administration’s ambitious vision of a New World Order to the overambitious nation-building efforts of the Clinton Administration in Somalia and Haiti. Kirkpatrick offers a strong critique of Clinton’s foreign policy, arguing that his administration went beyond Bush’s interest in building international consensus and turned it into a risky reliance on the United Nations. But she also questions when, how, and why the United States should avail itself of military solutions in the wake of the 9/11 attacks and the war in Iraq.

With the powerful words that marked her long and distinguished career, Kirkpatrick explores where we have gone wrong, looking to the past to find lessons for the future.