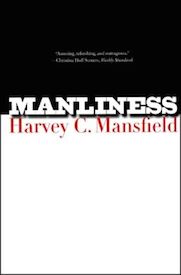 Here at last is the first comprehensive study — and unapologetic defense — of manliness, refuting the feminist propaganda that dominates popular culture’s portrayal of men and masculinity. Harvard professor Harvey C. Mansfield examines manliness from a huge variety of perspectives, including vulgar aggression, assertive manliness, philosophical manliness, and — as is most needed in these effeminate, anti-manly times — manliness as a virtue.

Drawing innumerable absorbing illustrations and examples from science, literature, and philosophy, Mansfield sketches a revealing and all-encompassing portrait of manliness — as boldly and nobly seeking and welcoming drama, preferring times of war, conflict, and risk, and bringing change or restoring order when it must be done. Manly men in their assertiveness, says Mansfield, raise and deal with uncomfortable and difficult issues, bringing them to the fore and making them public and political instead of sweeping them under the rug.

Mansfield also embarks upon a wide-ranging tour of masculine stereotypes — from Achilles and Plato to Nietzsche and Hemingway, all the way up to the politically motivated and manipulative caricatures purveyed by modern feminism. Formulating a reasoned defense of the noble quality of manliness, Mansfield urges men — and women also — to understand and accept manliness, and to restore it to its rightful and honorable place in our society.

Why society needs manliness to survive and prosper: