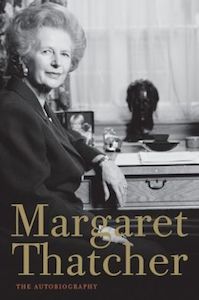 Even today, Margaret Thatcher endures as one of the main pillars of conservative thought and statesmanship in both Britain and the United States. Before her election, it was difficult even to conceive of the possibility that the steady left-ward march of history could  be slowed, much less reversed or stopped.  However, her election as Prime Minister of Britain in 1979 and subsequent re-elections, together with Ronald Reagan’s election as President in 1980, demonstrated that conservative ideas could prevail in elections, and that conservative governments could work, on a variety of different issues and problems.

Any reminder of those discoveries, now almost forty years old, are singularly welcome today.  The republication of Margaret Thatcher’s autobiography in a one-volume abridgment is thus timely and useful both for conservatively-minded readers, and for students of the history of the period.

The previous autobiographical works of Baroness Thatcher, The Downing Street Years and The Path to Power, suffered from a rather awkward division driven by the demands of marketing and publication.  The first volume, Downing Street Years, covered only Lady Thatcher’s career as Prime Minister.  This work, released shortly after she left office, was marketable, and informative, but focused  essentially on the middle of her career.  While interesting in its own right, it had shortcomings as an autobiography.  The Path to Power, published subsequently, covered the earlier periods of Lady Thatcher’s life, and concluded with some discussion of then-current issues.  This made for a rather confused narrative.

As the editor, Robin Harris points out, the one volume abridgment solves this dilemma, by taking the early chapters from Path to Power, and integrating them with The Downing Street Years.  Gone are the concluding chapters on then-current events, which are now, of course, very dated. This makes for a welcome reorganization, though it creates other problems.

Baroness Thatcher was always frank and direct in her assessments of situations and personalities, and this trait shines through in her prose.  She explains, in very distinct terms, the politics of her times, and her appraisal of the individuals who shaped it. She does not spare criticism of failure, or praise for success.  One can easily see  how such a trait would  be maddening for the more conventional political figures of her era, given to gentler, less-direct, language.  For the conservative reader, or for the history student, however, this trait is refreshing and helpful.

Lady Thatcher discusses, in her book, her role in the principal political events, both British and international, and their greater importance.  Thus, we understand the divisions that affected Conservative Party politics in the 1960’s and 1970’s as the Tories sought to come to grips with the problems of a failed socialist economic policy. Broadly, the two competing camps could be regarded as “managers,” who wished to tinker with the problems around the edges, and “militants,” who realized that only whole-sale reform and repudiation of socialism could begin to set things right.

Thatcher, in the end, came down on the side of the militants, who wanted to make drastic changes, and prevailed against the more managerially inclined leadership of the Conservative Party, headed by Sir Edward Heath.  Although she prevailed, she was never quite able, and apparently never quite willing, to completely oust her internal opposition, and this tension provides one of the recurring themes of her work. In the end, one could argue, she was defeated by a combination of pent-up ambitions, and the timid inclinations of her less-ideologically driven colleagues.

Until that defeat, however, Baroness Thatcher and her cabinet accomplished many wonderful things, and those victories are recounted here in detail. The mining strike which represented the attempt of the hard Left to make Britain ungovernable in the face of a determined Conservative government is fully described here, as are reforms to finance, education, and housing policy.  In addition, international events receive full treatment. The diplomacy and politics of the Falklands war with Argentina is covered extensively as are the interactions with the developing European Union and the work of Thatcher and Reagan which led, ultimately, to the collapse of the Soviet Union.  The internal dissent of the Tories, and Thatcher’s ultimate defeat in her last leadership contest, round out a whirl-wind narrative of events.

Unfortunately, the editors, in cutting out the last chapters of Path to Power, neglected to either include a chapter (presumably by a different author) describing Baroness Thatcher’s activities in retirement, which were considerable and extended over nearly two decades, or some other postscript; a collection of important speeches would have been interesting. As it stands, the autobiography simply stops at that point where Lady Thatcher moves out of Number 10 Downing Street.

That is unfortunate, but the work remains as an important account of one of the leading conservative lives of the twentieth century, and therefore is worthy of inclusion in any conservative’s library.