Memoirs of a Superfluous Man 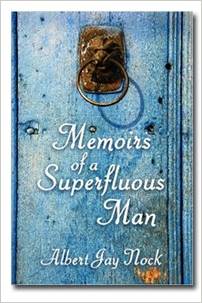 In the old days every town of pretensions had its village atheist. Bob Ingersoll was his hero and he shocked all right-minded persons by citing the mistakes of Moses and disputing Archbishop Usher’s chronology of the Bible. His religious heresy was only one aspect of his character. Usually he was a perverse and cross- grained fellow who took a cynical view of the entire cosmos and its in- habitants. All church members were hypocrites, all business men crooks, all politicians self-seeking oafs. He could cite enough examples to make the more openminded of his hearers uneasy. But he was so blatant and so obviously superior in his attitude that he succeeded in producing vast irritation so that the openminded commonly joined forces with the complacent to rule him out of respectable society.

In the general point of view expounded in his latest book, “Memoirs of a Superfluous Man,” Albert Jay Nock suggests a sublimated village atheist, learned, witty, keen, without theological crudities and intolerance, but with the old-timer’s perversities and cocksureness, and his readiness to generalize from a few specific in- stances that can be used to prove his thesis. This last, of course, is a familiar and engaging human weak- ness. Another reservation must be made. The village atheist cherished his convictions and was prepared to crusade and suffer for them. Mr. Nock is colossally indifferent because nothing really matters. Here he is more in the tradition of Arthur Balfour of whom it was said that, while he believed that two and two made four, a gentleman would not press the point.

The perverse side of the village atheist shines through Mr. Nock’s comments on recent wars. Those of us who never had heard of the Philip- pines when the blowing up of the Maine set off the Spanish-American War will be interested to learn that the war was prearranged by the rascally British who were desirous of keeping the islands out of the hands of the French or Germans. The First World War did not concern him be- cause it was an inevitable result of economism and its outcome was a matter of complete indifference. So with the present war. “It is so completely in the natural succession of things that one can feel little concern with its fortuitous ups-and-downs or with its immediate outcome. . . . Therefore this war, like the last, had held no interest for me. I have had no curiosity about its progress, have read nothing of it, and all I have heard has been casual.” Perhaps in moments of weakness he sometimes slips and glances at the war news in the papers. At least he somewhere notes that von Reichenau led the invasion of France in 1940— a name that most of the conscientious newspaper readers have forgotten.

Mr. Nock’s “Memoirs” is not an autobiography. He does not supply his readers with such irrelevant personal details as where or when he was born, where he went to college, whether he married, how he has made his living. Such personal history as he has furnished is ‘ intended merely as a framework for an account of the development of his ideas. The pose that emerges—for it seems to have been a pose that has been frozen into an attitude—is that of the superior individual who from a lofty ivory tower looks down on the comedie humaine with amused tolerance for its blood, toil, tears, and sweat in which moral values have no part.

The antics of the human race were a baffling problem to him until late in life he happened to read Ralph Adams Cram’s essay on “Why We Do Not Behave Like Human Beings.” Then all the parts of the puzzle fell into place. Mr. Cram advanced the doctrine that in the evolutionary- process only occasional individuals have reached the level of homo sapiens. As for the rest they can learn their letters. They cannot learn to read. In short they are hopelessly subhuman. Surveying history Mr. Nock was convinced that there is no evidence that “psychically the masses of mankind have budged a single peg in six thousand years.” They are essentially uneducated and uneducable. They cannot be improved by education or by political action. There you are. Nothing can be done about it.

Jefferson’s idea of universal education as a buttress for democracy was one of the great man’s mistakes. Universal education merely furnishes the masses with a tool which they are in- competent to use. With the spread of literacy has come a flood of absurd books and magazines to fit the tastes of Neanderthal man. Gresham’s law that bad money drives out good applies to the field of reading. Bad literature drives out good. Nothing like the good literature of the middle of the last century is published in America today.

With the rise to political power of the subhuman majority, society in both Europe and America has been definitely set in the pattern of what Mr. Nock calls “economism,” a word he prefers to materialism, in which men are exclusively preoccupied with the production and distribution of goods. In this preoccupation they are inexorably controlled by Epstean’s iron law. This law was proclaimed from the Sinai of a New York dinner table by a friend of his, Edward Epstean: “Man tries to satisfy his needs and desires with the least possible exertion.” Therefore men must continue to prey on each other in spite of the efforts of educators, preachers, and reforming politicians to correct their morals and improve their condition. Therefore they have refused to be made prosperous and happy by the grand panacea advocated by Henry George, one of the few persons for whom Mr. Nock professes admiration. In a simian world the single tax plus laisses faire was bound to command only disparaging sniffs. Driven by the Epstean-Nock law, Germany in seeking to plunder Europe is only attempting to do on a gigantic scale what men in general from the humblest individual to the captain of industry are trying to do in their own sphere of operations. But the illusion that conditions can be improved by political action has produced the terrifying development of Statism by which government, constantly strengthening its strangle-hold on the populace, can be used to plunder the industrious and thrifty minority for the benefit of the lazy and improvident majority—as in the case of the income tax which Mr. Nock detests as heartily as any rentier.

Education is in a hopeless muddle because we have been trying to educate the uneducable. The muddle is on the way to be resolved because society is awakening to the idea that it has no use for educated men and women, it needs only those who can be trained in certain skills. The Emersons can go hang. What society wants are more and better Edisons. There- fore it is devoting its educational institutions to producing faint replicas of the great inventor.

As was said at the outset there is a certain amount of uneasy truth in these generalizations. Disraeli once remarked that the English had discovered comfort and thought it was civilization—although Americans who have experienced British comforts might dissent. When old Doc Brinkley, the goat gland rejuvenator, came near being elected governor of Kansas, the usually optimistic William Allen White confessed his suspicion that mankind had always been beset by a vast moronic underworld that could be taught to read and write, but not to think; that lived on the level of its emotions and voted its prejudices, thus often elevating representative morons to seats of power. And a visitor to the ruins of Cnossus expressed the mournful opinion that modern plumbing with wiped joints could not be depended on to save civilization. We all have moods in which we sympathize with these pejorative views.

Nevertheless it might be said briefly that Mr. Cram’s impressionistic observations on the subhuman race are hardly to be accepted as established, even though we may not be convinced as yet by the contrary conclusions of Dr. Ales Hrdlicka, based on exhaustive scientific research.

As for the bright thought that the outcome of the war makes no difference Mr. Nock mind find disagreement among the Poles, Russians, Greeks, and the other people singled out to be slaves of the master race. Finally in spite of slickers, exploiters, and parasites the bulk of the American people seem to take satisfaction in doing some kind of honest and useful work.

The views of a Superfluous Man are handsomely appareled and urbanely presented with occasional quotations in Greek, Latin, French, German, and Italian elegantly and carelessly dropped in, Ad majorem Dei gloriam —Hospodee pomeelooy! As the perverse opinions of his village prototype were a hair shirt to complacency, these “Memoirs” should prove a stimulating conversation piece.