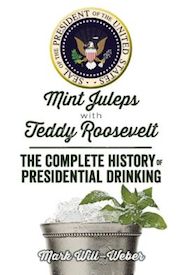 Americans exasperated by their leaders’ shortcomings might say politics drives them to drink. Offering a more enjoyable take on how drinking and political power have mixed throughout American history is journalist Mark Will-Weber in his new book, “Mint Juleps with Teddy Roosevelt: The Complete History of Presidential Drinking” (Regnery History).

The book doesn’t limit itself strictly to presidents and their relationships with alcohol, taking in first ladies, vice presidents, prominent staffers and unsuccessful presidential candidates, too. And it balances a seemingly light-hearted topic with alcohol’s often profound political ramifications, as seen in the temperance movement, which led to Prohibition, and that failed social experiment’s repeal.

Will-Weber reminds readers that George Washington put down Western Pennsylvania’s “Whiskey Rebellion” tax protest — a few years before he began distilling his own whiskey at Mt. Vernon — and that Thomas Jefferson’s spending on fine wines was a major factor in his near-bankruptcy late in life. But along with such well-known history, Will-Weber offers more obscure tidbits and behind-the-scenes anecdotes, including how a whiskey came to be named for Woodrow Wilson, and which presidents drank, which didn’t and how the occupants of the White House handled alcohol there during Prohibition.

The book touches on alcohol dispensed as a political lubricant of sorts — used “to guide voters into making the ‘right’ choice,” as the author puts it, by presidents including Washington, Andrew Jackson and, during his 1930s congressional campaigns, Lyndon Johnson.

Alcohol in political marketing also is covered: William Henry Harrison’s presidential campaign is remembered for its “Tippecanoe and Tyler, Too” slogan, but he also ran as the “Log Cabin and Hard Cider” candidate, giving him a common-man image in contrast to opponent Martin Van Buren. And booze has spelled trouble for many presidents, “Mint Juleps” notes, including prodigious drinker Ulysses S. Grant, whose administration was marred by a “Whiskey Ring” scandal involving officials illicitly pocketing liquor-tax revenue.

Recipes for such Oval Office concoctions as FDR’s Bermuda Rum Swizzle and Barack Obama’s White House Honey Ale are included among chapters devoted to each presidency. That enables readers to taste presidential drinks — hopefully, without suffering the sort of political or actual hangovers that some presidents did.

Book Review from the Pittsburgh Tribune-Review, by Alan Wallace