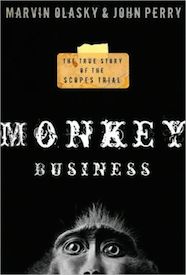 Darwinists are smart and creationists are stupid, right? Everyone has known that ever since the notorious Scopes Monkey Trial of 1925 — when Clarence Darrow bested William Jennings Bryan in debate and exposed Biblical creationism as nonsense, right? Not only were Tennessee’s laws banning the teaching of evolution overturned; also overturned was the idea that Biblical faith could be compatible with modern science. That’s how the classic movie “Inherit the Wind” tells it, and that’s what happened, right?

Wrong. In reality, the movie — and the popular views that have grown up around it — are more myth than reality. Slanted newspaper reporting (yes, even in 1925) spearheaded by venomous lampooning of Bryan and the creationists by H. L. Mencken set the tone for how the case, and creationists and evolutionists in general, have been viewed by society ever since. But in “Monkey Business,” Marvin Olasky and John Perry finally tell the whole truth about this infamous trial. Working from countless newspaper accounts, interviews with experts, and the official court transcript, which Perry said differs greatly from the story most people know, they uncover a chain of events that is shockingly different from how it has been portrayed.

“It’s not the trial, but the distortion of the trial that had an impact,” says Olasky, the editor-in-chief of World magazine. “The journalistic coverage led to a stereotype in American life of essentially the smart evolutionist vs. the stupid creationist….It was a perfect example of how religious and ideological views of reporters strongly influence their coverage.” Monkey Business explains what really happened at the trial, exploding numerous myths and uncovering facts that will surprise anyone who was taught the view of the case that has prevailed for eighty years now. In doing so, they show how what has crippled the case for creationism in the public mind ever since is based more on fable than fact. In this book they vigorously reassert the reasonableness of creationism.

Beyond the myths, the real truth about the Scopes Monkey Trial: