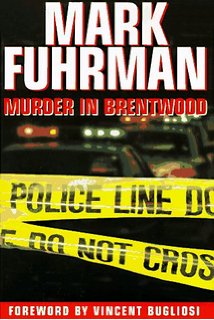 More than twenty years after the OJ Simpson trial, a kind of rough justice has been served. Mark Fuhrman, the homicide detective accused of evidence tampering and convicted of perjury, rose from the ashes to write a series of investigative books, one leading to the capture of a young teen’s rapist and killer.* By contrast, OJ Simpson wound up behind bars on charges unrelated to the murders of Ron Goldman and Nicole Brown Simpson. What went around in 1994 seemed to come around again, in a peculiar kind of do-over.

For anyone trying to understand present-day race relations in America, the OJ Simpson case is a jagged piece of the puzzle.  Murder in Brentwood, first published three years after the trial, is a plainly written presentation of facts with supporting crime-scene documentation that allows readers the freedom to interpret what happened for themselves. Although much of the police work on the case was questioned, know this: Mark Fuhrman’s extensive crime-scene notes were not used, several pieces of evidence he noted were ignored, and his partner Brad Roberts was never called to the stand. Fuhrman makes a credible argument that had Roberts been called, the prosecution could have won the case.

As an author, Fuhrman relays information in the basic writing style taught at Los Angeles Police Academy where he graduated second in his class. He avoids hype and hearsay, without soap opera embellishment of the kind that permeated televised reports at the time. His crime scene notes and other documentation are faithfully reproduced in the book including original search warrants and stab-wound reports.

What Murder in Brentwood clearly illustrates in hindsight is the powerful wish of many not to drink from the cup that would poison OJ Simpson’s iconic reputation. A shaken nation needed OJ on his pedestal. The collective will was not there to pull him down. That lack of will arguably weakened the judge, just as it did the prosecutors, while the omnipresent glare of publicity distracted and confused them.

Undoubtedly, there was something else on everyone’s minds the night of the murders and throughout the trial—the specter of Los Angeles bursting into furious flames with one tiny misstep, just as it had done two years earlier after the Rodney King verdict. Fear of race riots glowered over the proceedings like low-hanging storm clouds, but went unaddressed by the defense, the prosecution and the judge, all of whom had to give the appearance of conducting the trial like any other.  But it wasn’t just any trial. It was taking place under intense scrutiny with an omnipresent threat of city-wide violence, even nation-wide violence, should the verdict clash with OJ’s celebrity narrative.

Meanwhile, somebody had to pay. Even if the murders of  Ron Goldman and Nicole Brown Simpson went unsolved.

Despite unproven claims of evidence tampering, Fuhrman’s career was destroyed. His own team, the prosecution, placed him in a position to be cross-examined on race-relations grounds. Whether they did this consciously or unconsciously is a question for psychologists. Prosecutor Christopher Darden, in particular, seemed deeply conflicted, saying, “My responsibilities as a prosecutor clearly told me to take this case. But I had other responsibilities as a black man, and they were difficult to sort out.”

The damage was done. The defense dug deep and found that Fuhrman had used racial epithets on tape in the course of make-believe screenwriting exercises with a professional writer. In his final summation to the jury, Johnny Cochran ignored Fuhrman’s years of service protecting black residents on the streets of South Central, using inflated slurs like, “a genocidal racist… America’s worst nightmare, the personification of evil.” A satellite trial was ordered and Fuhrman was kicked off the LAPD, fined and placed on probation. OJ returned to the golf course, a free man.