Nearer, My God: An Autobiography of Faith 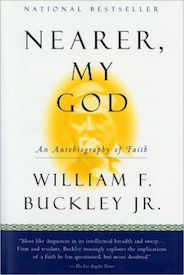 Kingsley Amis wrote of the television production of Evelyn Waugh’s Brideshead Revisited that it ought to have been subtitled: “How I Lived in a Big House and Found God.” Amis was put off by Waugh’s juxtaposition of the high life and Catholicism.

Similar things have been said about William F. Buckley Jr. Buckley has to date produced—in addition to an almost 50-year stream of articles, columns, novels, and television programs—no fewer than six autobiographical books celebrating his ideas, his magazine National Review, his famous friends, his sailing, his travels, his music, and the assorted adventures of a charmed life lived at full speed.

His latest book, Nearer, My God: An Autobiography of Faith, celebrates his life-long affair with Christianity. It is deeply personal and ultimately edifying, for it tells in a simple and straightforward way the centrality of faith in one man’s life, a man who, moreover, is the very epitome of the peripatetic man of affairs often thought beyond such superstitions.

It is reported that Ayn Rand once said to Buckley, “You are too intelligent to believe in God.” Buckley knows better. Faith is perhaps a greater gift to the intellectual than it is to the peasant, for faith is a great equalizer: “The illiterate who believes and is sustained by his faith is as airborne as Thomas Aquinas after completing his Questions,” writes the very literate Buckley.

The septuagenarian is here serene and self-assured, a happy Catholic who is grateful for the consolations of his faith. He has never apologized for his family or his fortune or his philosophy, and he is not about to begin apologizing for his faith. But neither does he argue for it.

“I have never sought to console in explicitly Christian terms,” he writes, “anyone who wasn’t, so to speak, already a communicant.”

And so he has written an idiosyncratic book that is wide-ranging in the topics it treats, selected only because “they need meet no higher entrance qualification than that [they] engaged my attention.” Aware that a collection of musings on things religious may not be engaging to anyone else, Buckley asks the reader to “hear me out, and see how the words of others have greatly consoled me and instructed me.” And in due course we hear from many of those whom Buckley has read, or befriended, or both, and the reader’s patience is rewarded.

It is not immediately clear why Buckley wrote this book, for in it there is little that he has not said before; indeed several of the chapters are reproduced substantially from material stretching back 30 years—including the magnificent epilogue on his mother’s faith, to whose memory the book has been dedicated. This book emerges from a sense of obligation; a feeling that a believer who writes so much ought at some point to write of his belief.

Buckley recounts an Anatole France story that he considers “unrivaled in devotional literature.” France writes of a monk, new to his monastery, who disconsolately watches his brethren display their great talents in homage to Our Lady: singing hymns, reciting poetry, and playing instruments. The novice has no such talent, his only skills being those of the juggler—his livelihood before entering religion. One night after all the monks are asleep, the novice takes his sack of mallets and balls and clubs and, creeping out of the dormitory and into the empty chapel, juggles for Our Lady.

Buckley acknowledges that “my arguments are imperfectly done [and] have been used time and again in other quarters; I have only to contribute this, that the mix here is my own, for better or worse.” So he writes about his faith, even as the novice juggles for Our Lady or the little drummer boy plays for the baby Jesus.

“If I could juggle,” he confesses, “I’d do so for Our Lady. In fact, I have here endeavored to do my act for her.”

Buckley’s book then is something quite rare among religious books penned by personages famous for their work in other fields. He is not assailing, though there are a few choice passages surveying what has become of Christian schools in America, concluding that his old school could be truthfully renamed the “Millbrook School for Pagan Boys and Girls.” Neither is he arguing, though he reproduces a classic argument on the faith between Msgr. Ronald Knox and the aggressively anti-Catholic Sir Arthur Lunn—which ended with the former receiving the latter into the Church. Nor is Buckley questioning, though he asks tough questions (and includes the replies) of a forum of his convert friends, comprising an all-star cast of conservative Catholic converts including Fathers Richard John Neuhaus and George Rutler. (They are asked, and answer, the big question: Why did you convert? The answers are moving.)

Faith is perhaps a greater gift to the intellectual than it is to the peasant, for faith is a great equalizer…

No, what Buckley is doing in this book is primarily believing, and inviting the reader to embrace the beautiful risk of belief. It is truly an autobiography of faith, and more than that, an act of piety—an act of filial piety, the dutiful son writing for his mother, and Our Mother.

Buckley surveys the difficult questions, beginning with the development of doctrine, the reconciliation of free will with God’s foreknowledge, the existence of evil, miracles, the historicity of Jesus and the resurrection, the doctrine of hell, corruption in the Church, and the interpretation of Scripture, before moving on to the current controversies about sex: contraception, women’s ordination, clerical celibacy, and divorce.

His conclusions will not alarm the orthodox reader, but on most questions, even when furnished the material from his interlocutors, Buckley shies away from the heavy theological justifications for difficult positions. He prefers to trust and believe in a God in whom he knows inconsistencies are impossible, even if he knows not how. Buckley does not employ the Questions of St.

Thomas; he prefers the route of the simple man who believes and is sustained by belief.

Buckley is in typical form on the question of contraception.

“My own incomplete understanding of the natural law balks at the central affirmation of Humanae Vitae,” he writes, “even as I’d of course counsel dutiful compliance with it.”

He has read Janet Smith for the Magisterium and Father Richard McCormick for the dissent. He thinks Father McCormick’s position is an “exercise in intellectual freedom—but also an invitation to contumacy.”

And how does a Catholic intellectual decide when faced with a conflict between his opinion and the teaching of the Church? Buckley is straightforward. “The answer, for a Catholic, has got to be: the position taken by the Pope, as spokesman for the Magisterium.” He does not understand but accepts. The Catholic cannot be asked to do more.

On that matter Buckley himself has evolved. In response to Pope John XXIII’s 1961 encyclical about the Church, Mater et Magistra (Mother and Teacher), Buckley wrote a National Reviewarticle entitled “Mater Si, Magistra No.” Later, after John Paul II’s Centesimus Annus (On the Hundredth Year, 1991), he penned, again for National Review, “Mater et Magistra After All.”

Buckley’s faith is primarily a matter of the heart, not the head. The best parts of the book are Buckley practicing his faith: at a Jesuit boarding school, at Lourdes, in his parish, as a godfather, at the ordination of his nephew to the priesthood. The sense is conveyed that Buckley’s faith now is not very different from his faith a half-century ago, when as a teenager he arrived for a private audience with Pope Pius XII with his left arm weighed down by 30 rosaries he had brought along to be blessed.

If there is a sad note in the book it is that the Church today is not what it was in the days of Pius XII. Buckley welcomes Vatican II and its opening to the modern world, but he concludes that the changes wrought in Catholic life have been disastrous. He writes convincingly that the abandonment of Friday abstinence from meat deprived Catholics of a “weekly reminder that a Catholic Christian was, at least nominally, just that—someone who accepted the Church’s rules.”

He reproduces in large part a scorching essay that he wrote thirty years ago against the liturgical reforms, except that now he is less scorching. He laments the changes, and professes himself “vexed” on the whole question. As a lover of Latin and good English, both of which were banished from the new Mass, Buckley is resigned to be disconsolate, and writes that he is happy that the next liturgical event conducted for his benefit will be his funeral, at which he will be happily dead.

Buckley the senior citizen has mellowed, as a comparison of his comments on the liturgy then and now illustrate. But he is not melancholy. There is much joy in his pages. Joy in friends (we get a chapter on Malcolm Muggeridge), joy in his family (we meet several members of the Buckley clan), and yes, the Buckleyesque joy in words. (No Catholic vocabulary should be without “afflatus”: a divine impulse; or “thaumaturgical”: concerning the working of miracles.) But above all there is the joy of a long life lived with undiminished zest, animated by faith in Christ, and secure in the Church that he loves.