The New Concise History of the Crusades 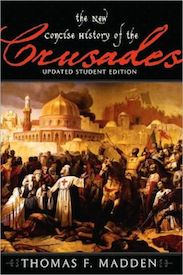 Misconceptions about the Crusades are all too common. Generally portrayed as a series of unprovoked holy wars against Islam, they are supposed to have been the epitome of self-righteousness and intolerance — a black stain on the history of the Catholic Church in particular and Western, Christian civilization in general. Since September 11, variations of this theme have been used to explain — even justify — Muslim terror against the West. Former president Bill Clinton himself, in a speech at Georgetown University, fingered Muslim anger at the Crusades as the “root cause” of the present conflict.

But the truth is that the Crusades had nothing to do with colonialism or unprovoked aggression — and in “The New Concise History of the Crusades,” renowned medieval historian Thomas F. Madden sets the record straight. The Crusades, he shows, were not the brainchild of an ambitious pope or rapacious knights but a response to more than four centuries of conquests in which Muslims had already captured two thirds of the old Christian world. At some point, Christianity as a faith and a culture had to defend itself or be subsumed by Islam. The Crusades were that defense. Their entire subsequent history is one of Western reaction to Muslim advances — they were no more offensive than was the American invasion of Normandy.

Islam was born in war and grew the same way. From the time of Mohammed, the means of Muslim expansion was always the sword.

With enormous energy, the warriors of Islam struck out against the Christians shortly after Mohammed’s death. Palestine, Syria, and Egypt — once the most heavily Christian areas in the world — quickly succumbed.

By the eighth century, Muslim armies had conquered all of Christian North Africa and Spain. In the eleventh century, the Seljuk Turks conquered Asia Minor (modern Turkey), which had been Christian since the time of St. Paul.

The Byzantine Empire was reduced to little more than Greece. In desperation, the emperor in Constantinople sent word to the Christians of western Europe asking them to aid their brothers and sisters in the East.

The end of the medieval Crusades did not bring an end to Muslim jihad — Islamic states like Mamluk Egypt continued to expand in size and power, and the Ottoman Turks built the largest and most awesome state in Muslim history.

Under Suleiman the Magnificent the Turks came within a hair’s breadth of capturing Vienna, which would have left all of Germany at their mercy. At that point Crusades were no longer waged to rescue Jerusalem, but Europe itself.

It is often asserted that Crusaders were merely lacklands and ne’er-do-wells who took advantage of an opportunity to rob and pillage in a faraway land. Recent scholarship has demolished that contrivance. The truth is that the Crusades were notoriously bad for plunder. A few people got rich, but the vast majority returned with nothing.

It is often assumed that the central goal of the Crusades was forced conversion of the Muslim world. Nothing could be further from the truth. Muslims who lived in Crusader-won territories were generally allowed to retain their property and livelihood, and always their religion.

It was not until the 13th century that the Franciscans began conversion efforts among Muslims. But these were mostly unsuccessful and finally abandoned. In any case, such efforts were by peaceful persuasion, not the threat of violence.

Jews perished during the Crusades, but the purpose of the Crusades was not to kill Jews. Quite the contrary: Popes, bishops, and preachers made it clear that the Jews of Europe were to be left unmolested.

The Ottoman Turks not only conquered their fellow Muslims, thus further unifying Islam, but also continued to press westward, capturing Constantinople and plunging deep into Europe itself. By the 15th century, the Crusades were no longer errands of mercy for a distant people but desperate attempts of one of the last remnants of Christendom to survive. Europeans began to ponder the real possibility that Islam would finally achieve its aim of conquering the entire Christian world.

In 1529, Suleiman the Magnificent laid siege to Vienna. If not for a run of freak rainstorms that delayed his progress and forced him to leave behind much of his artillery, it is virtually certain that the Turks would have taken the city.

Whether we admire the Crusaders or not, it is a fact that the world we know today would not exist without their efforts. Without the Crusades, Christianity might well have followed Zoroastrianism, another of Islam’s rivals, into extinction.

Tags: The New Concise History of the Crusades, Thomas Madden