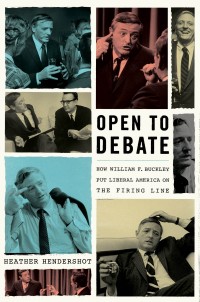 A unique and compelling portrait of William F. Buckley as the champion of conservative ideas in an age of liberal dominance, taking on the smartest adversaries he could find while singlehandedly reinventing the role of public intellectual in the network television era.

When Firing Line premiered on American television in 1966, just two years after Barry Goldwater’s devastating defeat, liberalism was ascendant. Though the left seemed to have decisively won the hearts and minds of the electorate, the show’s creator and host, William F. Buckley—relishing his role as a public contrarian—made the case for conservative ideas, believing that his side would ultimately win because its arguments were better. As the founder of the right’s flagship journal, National Review, Buckley spoke to likeminded readers. With Firing Line, he reached beyond conservative enclaves, engaging millions of Americans across the political spectrum.

Each week on Firing Line, Buckley and his guests—the cream of America’s intellectual class, such as Tom Wolfe, Noam Chomsky, Norman Mailer, Henry Kissinger, and Milton Friedman—debated the urgent issues of the day, bringing politics, culture, and economics into American living rooms as never before. Buckley himself was an exemplary host; he never appealed to emotion and prejudice; he engaged his guests with a unique and entertaining combination of principle, wit, fact, a truly fearsome vocabulary, and genuine affection for his adversaries.

Drawing on archival material, interviews, and transcripts, Open to Debate provides a richly detailed portrait of this widely respected ideological warrior, showing him in action as never before. Much more than just the story of a television show, Hendershot’s book provides a history of American public intellectual life from the 1960s through the 1980s—one of the most contentious eras in our history—and shows how Buckley led the way in drawing America to conservatism during those years.