Out of the Ashes: Rebuilding American Culture 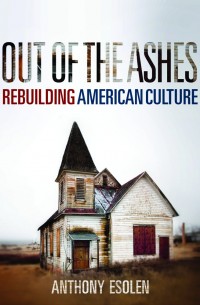 American culture is a smoldering ruin and we must do everything we can to rebuild it.  That is the premise of this book by Anthony Esolen, professor of English at Providence College and one of our major conservative (and Catholic) cultural commentators.  Esolen presents a plan for attacking the problem on several fronts: politics, aesthetics, education, the family and sexuality, work and the economy.  Esolen bases himself on a humanist conservative tradition represented by thinkers such as Joseph Pieper, who emphasized the importance of leisure and celebration in human flourishing.  As an English professor, Esolen naturally loves the Western literary tradition and draws from it for the timeless lessons it can teach.

Esolen proposes immersing ourselves in that tradition in order to learn to speak and to read well and thus avoid the entrapment of political cant.  He advocates revitalizing music and the other arts and crafts by having recourse to traditional forms.  For the massive problem of education (both primary and college), his solution involves a combination of homeschooling and building new schools which emphasize individual-centered learning and the classical disciplines.  He advocates bringing up boys and girls to be distinct and complementary rather than identical, so that they can take their place as responsible men and women in society, reversing the ravages of the sexual revolution.  And he advocates moving the center of our lives away from the government and back toward community and town life, always with the understanding that we are spiritually pilgrims whose true home is not on earth.

Esolen’s perceptions of the current situation are right-on, as are his solutions.  One’s quibbles with the book are therefore mainly in the matter of style and tone.  Esolen is a master writer, but the book’s style is often too elaborate and ornate for a practical manifesto, even though it does have the virtue of being short.  Erudite literary analogies are of limited usefulness to those who are not enthusiasts of classical literature.  To refer to homosexuals as “sodomites,” as Esolen does on one occasion, seems counter-effective.  A few of Esolen’s verbal darts left this reader scratching his head.  In one place he speaks of women who instead being homemakers choose to “[scrape] plaque off the teeth of strangers.” Is there something wrong with being a dentist? In another place he says, in reference to the 1950s, that “their treatment of blacks was shameful.” Whose treatment of blacks was shameful, specifically? Esolen might have explained himself better in passages like these.

The book’s persuasiveness will depend partly on the reader’s level of optimism about the likelihood of reviving our moribund culture.  It is important to realize going in—as Esolen seems to—that such a revival, it happens at all, will likely take centuries and thus no one living today will see the fruits of it.  Even so, Esolen provides a compelling blueprint for how to get the ball rolling.

Tags: Anthony Esolen, Out of the Ashes