The People Have Spoken And They Are Wrong 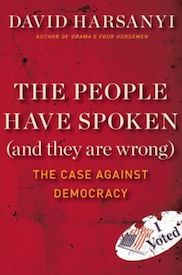 Democracy may be one of the most admired ideas ever concocted, but what if it’s also one of the most harebrained? After many years of writing about democracy for a living, David Harsanyi has concluded that it’s the most overrated, overused, and misunderstood idea in political life. The less we have of it the better.

“Democracy” is not synonymous with “freedom.” It is not the opposite of tyranny. In fact, the Founding Fathers knew that democracy can lead to tyranny. That’s why they built so many safeguards against it into the Constitution.

Democracy, Harsanyi argues, has made our government irrational, irresponsible, and invasive. It has left the American people with only two options—domination by the majority or a government that can’t possibly work.

The modern age has imbued democracy with the mystique of infallibility. But Harsanyi reminds us that the vast majority of political philosophers, including the founders, have thought that responsible, limited government based on direct majority rule over a large, let alone continental scale was a practical impossibility.

In The People Have Spoken, you’ll learn:

Harsanyi warns that if we don’t recover the Founders’ republican vision, “democracy” might very well spell the end of American liberty and prosperity.

Tags: David Harsanyi, The People Have Spoken And They Are Wrong