Plunder and Deceit: Big Government’s Exploitation of Young People and the Future 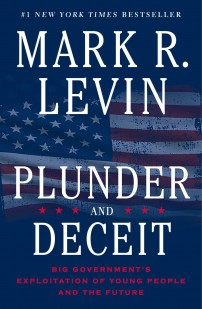 Mark Levin’s Plunder and Deceit covers the ways in which intrusive, unconstitutional Big Government is harming young Americans. A century of progressive indoctrination, policies, and cronyism have eroded the common understanding of what our Founders gave us as a great and incredibly wise gift.  Levin points out that our Founders were concerned with freedom and liberty for themselves and for their successors.

They were clear in their intentions for future generations.  Our present generation talks in terms of their entitlement to loot the public treasury without regard to what the accumulating debt will do to our children, grandchildren, and beyond.   Levin makes cogent, concise, and well documented arguments that show us how civil society connects not only the living to each other, but to people of the past and to those who will yet be born.  We have responsibilities and duties to past, present, and future citizens.

Instead, Mark Levin argues, America’s young are being plundered and deceived by all levels of American government. Within Plunder and Deceit, Levin focuses in particular on the issues of government spending and debt, but also touches on other issues as well.

Below are some of the best highlights from the book:

National Debt: Levin shows us how the gargantuan national debt limits the economy’s ability to grow by soaking up investment capital, by requiring ever more taxes to pay ever more interest, and how this will become a wall blocking the prosperity of future Americans.   He shows us how Social Security has always been a deception that is going to be impossible to continue as fewer productive workers will be taxed more and more to finance an increasing number of retirees and disabled Americans.

Obamacare & Medicare: Levin also makes sure to explain how medical entitlements, from Obamacare to Medicare, have rising costs and require ever-rising taxes. Levin argues that the money used to pay for these programs will hamstring the ability of younger people to get well-paying jobs, to save for their futures and to provide for their families.

Education: Levin doesn’t spare our education system, either. He argues that we have been swindled by elites and experts. Trillions of dollars have been poured into schools with the promise of better education, but testing proves that this money accomplished little in increasing the achievement of our kids. Even worse, Levin points out, is the lack of life skills taught in our schools, which makes it easier to make our children dependent on federal largesse.

Environmentalism: Levin argues that the increasing power of environmentalists and their emphasis on slowing growth has instead led regulation to grow, crippling businesses. Levin argues that, rather than preserving prosperity for all, progressivism has instead begun to condemn “unsustainable” growth as a moral evil, hurting young Americans who need economic growth in order to make their way in the world.

Finally, Levin touches upon the importance of our written constitution in preserving the checks and balances on federal power. These clearly delineated rules prevent bureaucrats and politicians from accruing power unto themselves, IF they are followed correctly.

Levin warns that, as America drifts away from the foundation of constitutional law, that federal tyranny and waste will grow. And the growth of that tyranny, of plunder and deception, will harm not only today’s Americans but the Americans of tomorrow.