The Politically Incorrect Guide™ to the Bible 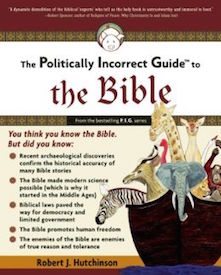 For secular fundamentalists, religion in general, and the Bible in particular, are not just wrong-headed but actually dangerous. That’s because religion and the Bible stand in the way of everything they value most in life — primarily unlimited sex, of course, but also the power to reshape society into a kind of secular utopia free from traditional ethical restraint. For an influential group of academic, government, and media elites, the Bible, far from being the cornerstone of Western civilization, is actually the source of most of the evil in the world today: a veritable cornucopia of superstition, obscurantism, and “bad taste.”

Village-atheist assaults on the Bible are now commonplace in public schools, universities, the media, and even some elite seminaries. Acid-tongued pundit Christopher Hitchens and other widely celebrated writers warn the world about the growing menace of religious convictions. The Jesus Seminar and documentaries such as The Bible Unearthed claim to demonstrate that little or nothing the Bible says happened really happened anyway. Even pop culture has gotten into the act, with the TV drama The West Wing and the popular magicians Penn and Teller featuring much-ballyhooed “debunkings” of the truth of the Bible, purporting to show that the book that millions revere as holy is not just filled with silly fables masquerading as history, but with incitements to violence and immorality.

But now, in “The Politically Incorrect Guide™ to the Bible,” Robert J. Hutchinson sets the record straight. Hutchinson, the winner of eight journalism awards from the Associated Church Press and other organizations, sifts through archaeological and historical evidence to prove that the Bible — both the Old and the New Testaments — is on solid ground as history. He also explodes some of the most common myths about Biblical content and teaching, and shows why the secularist assault on all religions as being equally likely to move people to commit evil deeds is drastically wrongheaded. Hutchinson even includes copious quotes from the Founding Fathers and great thinkers throughout history (including quite a few no one would ever expect, such as Christopher Hitchens himself) extolling the manifold virtues of deep familiarity with the contents of the Bible.

Engaging and comprehensive, The Politically Incorrect Guide to the Bible establishes a strong line of defense for conservatives looking for ammunition against the secularist anti-Christian onslaught.

The straight truth about Holy Writ:

Tags: Robert Hutchinson, The Politically Incorrect Guide to the Bible