In Praise of Nepotism 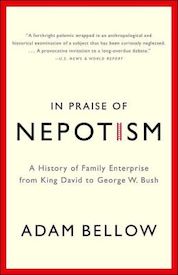 What do ants, Chinese clans, Don Corleone, King Saul, and Indira Gandhi have in common? They all have practiced the ancient art of nepotism. Why? Because it is a basic animal instinct beneficial to the individual, the family, and perhaps even society. If we don’t look after our own, who will? All this is described in expansive detail in Adam (son of Saul) Bellow’s In Praise of Nepotism: A Natural History.

Here in America, where we have a historical aversion to nepotism, it has flourished nonetheless in the Mafia, Hollywood, and in our famous dynastic political families: the Adamses, Roosevelts, and Kennedys. Although Bellow asserts that nepotism has been practiced by cops and firemen, most of the book is devoted to the lives of rich and powerful men, some who ascended from humble beginnings—the Rothschilds from the Jewish ghetto of Frankfurt, Joseph Kennedy from the slums of East Boston.

Bellow believes “nepotism works, it feels good, and is generally the right thing to do.” The “New Nepotism,” an improved American version of the old, “is voluntary, not coercive; it springs from the motives of children, not the interest of parents.” You can get in the door, but once inside, you will be under close scrutiny. By such standards, one wonders how he would assess the worthiness of the most powerful man on earth, who would not be in the Oval Office without his father’s name and help.

The book ends with an exhaustive list of people who have followed in some sort of familial tradition, and on one of these lists I came across—with a mixture of horror and pride—my own name. Bellow, too, has a famous literary father and believes it was “not likely that I would have published this book without the added value my name brings.” I disagree: The book would certainly have been published, and it will be widely admired, regardless of the author’s paternity.