The President, the Pope, and the Prime Minister 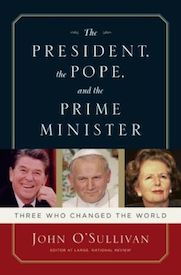 Who brought down the Soviet Union? According to liberals, it collapsed of its own, with an assist from the reform-minded Mikhail Gorbachev. But this explanation not only scants the role of Western anti-communists – it implies they had exaggerated its dangers all along. Now, John O’Sullivan gives credit where it’s due. “The President, the Pope, and the Prime Minister” is a sweeping, dramatic account of how President Ronald Reagan, Pope John Paul II, and British Prime Minister Margaret Thatcher together took on the most powerful and aggressive foe that liberty has ever known — and won.

O’Sullivan begins by reminding us that when these three figures entered the world stage, Communism — far from imploding — was on the march around the globe. Jimmy Carter and other Western leaders had pursued a defeatist policy of “dialogue” and appeasement. But Reagan, Thatcher, and the Pope (who, as a Pole, knew Communist tyranny first-hand), would have none of it – and thus began one of the great moral-political battles of will that history has ever known.

In The President, the Pope, and the Prime Minister, veteran journalist (and former Thatcher speechwriter) John O’Sullivan, reveals:

Indeed, writes O’Sullivan, these three leaders so revived the economies and spirits of the West that, by the mid-90s, complacency became a serious problem — as Al Qaeda quietly began its terrorist campaign in the shadows. Today, as we face a new and perhaps even deadlier enemy than Soviet Communism, we need to revisit the powerful lessons taught by these three great leaders.

“Reagan, Thatcher and John Paul II were the trio who destroyed Soviet Communism and its Evil Empire. John O’Sullivan is the ideal writer to describe how they did it. Here is his eagerly awaited book.” —PAUL JOHNSON, author of A History of the American People and Modern Times

“John O’Sullivan has directed his wit and imagination to look at three episodes in recent history. Ronald Reagan, months after his inauguration, was shot down and very nearly killed. Pope John Paul II very nearly died from an assassin’s bullet. And then Margaret Thatcher, in the fifth year of her administration, was very nearly a casualty of an IRA bombing in Brighton. O’Sullivan wonders at the coincidences: the three major figures in the evolution of conservative doctrine in the last decade of the Cold War. His enormous knowledge and striking powers of description give a focus to these events, and to the harmony, up until almost the end, in the prescriptions of the three outstanding figures at the end of the century. He examines the mysteries, describes hair-raising alternatives, and even asks, as though we were not looking, whether there was divine intelligence at work. An exciting volume, sheer pleasure to read, and to rejoice over.” —WILLIAM F. BUCKLEY, JR.

Tags: John O'Sullivan, The President the Pope and the Prime Minister