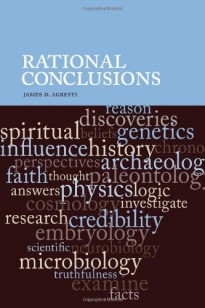 Over the past decade, the cup of Christian apologetics has runneth over with resources. In between conference lectures, museum exhibits, and curricula, it’s handy to have voracious yet pithy fact checkers like James D. Agresti, an Ivy League-educated mechanical engineer. Agresti has a passion for truth within a wide range of interests, and in fact became a believer in Christ while studying the Bible cover to cover as an atheist. Speaking the language of the skeptic, Agresti predicates his book Rational Conclusions on a question rather than an agenda.

“If you were to ask the people you know why they believe what they do,” Agresti challenges, “how many do you think would give a rational answer?” His goal is “to examine facts that can be used to arrive at rational conclusions regarding the Bible.” Agresti reports and lets the reader decide, paying heed to the “typical conflict between thoroughness and brevity” in matters of knowledge.

Rational Conclusions is both a concise primer on apologetics and a meticulous field guide to journalistic error on topics related to history and science. “It never ceases to amaze me how some people will blindly accept unsubstantiated claims if they align with their personal views but indignantly demand absurd statements of proof for anything that runs counter to them,” writes Agresti. He demonstrates how to begin with a large number of possibilities and narrow the rational conclusions by a process of elimination.

To accommodate the pursuits of a wide readership, Agresti offers a primary overview of factual information, accompanied in a finer print by further in-depth elucidation on certain details for the more intellectual researcher. For instance, while it behooves all to know the evidence of Christ’s crucifixion and scientific disputes about the Big Bang theory, not everyone cares to study the Pharisaical calendar or the density parameter, and therefore Rational Conclusions takes more than one type of reader into consideration. It could be put to good use as a textbook, and is a valuable read for legislators who care about academic freedom.

Agresti apprises readers of the data involved in debates over ancient history, archaeology, reliability of the Biblical record, paleontology, embryology, genetics, etc. He occasionally adds a sarcastic quip when discussing arguably irrational conclusions, but Agresti is remarkably objective and clarifies when he is expressing his own opinion rather than a fact or someone else’s conclusion. Agresti is also attuned to where these issues get distorted on the pop culture and consumer media level, such as in Dan Brown’s The Da Vinci Code and Ernst Haeckel’s embryological illustrations.

The book has no printed index, but rather directs the reader to the website www.rationalconclusions.com for the 2,566 footnotes and citations, which on their own make a great investigative starting point. This lack of print index and notes is an inconvenience for those who don’t have ready access to the internet when reading the book, but it does allow the author to keep the material in this 2009 book up-to-date, and it intersects well with new media. Agresti acknowledges the fluid realities of scholarship, especially where science is concerned, and states in his book that if there are any errors discovered he will “publicly correct” them at the aforementioned website.
Rational Conclusions is a testament to the age of independent research. Anyone, regardless of accreditation, can now access quality sources on the intellectual reasons for the Christian faith, and it is humbling to consider that the data we have today provides far more evidence than the strong faithful of previous generations ever possessed.