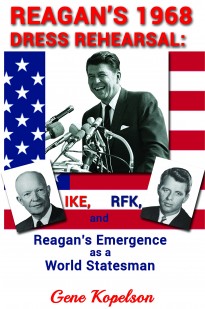 This ground-breaking book weaves an exciting, never-before-told story of Ronald Reagan’s first quest for the presidency in the late 1960s. Behind the scenes, Reagan’s private political mentor was Dwight Eisenhower and Reagan’s public political foe was Robert Kennedy.

Many of the major triumphs of Reagan’s subsequent tenure as president originated during that first campaign: Tearing down the Berlin Wall. Lessening nuclear weapons. The peaceful defeat of communism. Creating a missile defense shield for America. Bringing freedom to Eastern Europe. And dealing with hostage crises.

During 1968, Reagan emerged as a world statesman and shaped his crusade to restore pride in America. Kopelson further demonstrates why for Reagan, Ike’s tutelage was critical. This political mentorship changed America’s national priorities through the end of Reagan’s presidency, whose effects are still very much with us today.