Reagan’s War: The Epic Story of His Forty Year Struggle and Final Triumph Over Communism 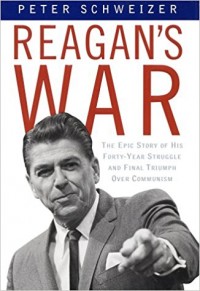 A meticulously researched and penetrating analysis of the Cold War, and the man who ended it. Peter Schweizer delves into the origins of Ronald Reagan’s vision of America, and documents his consistent, aggressive belief in confronting the Soviet Union diplomatically, economically, and militarily.

Ronald Reagan is often dismissed as an “amiable dunce,” a genial actor who simply mouthed whatever slogans his right-wing puppet masters put in front of him. Reagan’s War brilliantly overturns this myth. Drawing on private diaries dating from Reagan’s days as an actor and extending through his presidency, Peter Schweizer, a well-known historian of the Cold War, shows that Reagan’s fervent anticommunism marked every era of his life and was the driving force behind his policies as president.

Schweizer explores Reagan’s involvement with anticommunist liberals in Hollywood and his role as a secret informer for the FBI. Reagan’s outspoken criticism of d?tente in the late 1960s and his forceful advocacy for the overthrow of the USSR drew the attention of Soviet officials, who began a KGB file on him when he was still governor of California. By the time he was elected president, they viewed him as a serious threat to their interests. Reagan’s War shows just how right they were, presenting compelling evidence that Reagan personally mapped out and directed a campaign to bankrupt the Soviet Union and wage an economic and political war against Moscow.

In telling the story of Reagan’s ultimate triumph, Schweizer also brings to light dozens of previously unknown facts about the Cold War, based on secret documents obtained from archives in Russia, Germany, Poland, Hungary, and the United States. Among his many startling revelations are Kissinger’s private deals with Soviet leaders that protected his own political viability while allowing the Soviets to pursue their goals within their own sphere; a North Korean and East German plot to assassinate Reagan in 1983; Reagan’s secret funding of Solidarity in Poland; and the behind-the-scenes support Soviets and East Germans provided for European and American peace movements, as well as their clandestine contacts with U.S. government officials.

A fresh, often startling look at Ronald Reagan and his central role in winning the war for global dominance in the 1980s, Reagan’s War is a major work of twentieth-century history.