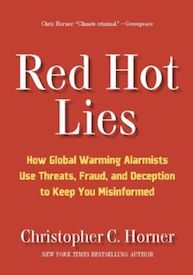 Liars–Al Gore, the United Nations, the New York Times. The global warming lobby, relentless in its push for bigger government, more spending, and more regulation, will use any means necessary to scare you out of your wits–as well as your tax dollars and your liberties–with threats of rising oceans, deadly droughts, and unspeakable future consequences of “climate change.”

In pursuing their anti-energy, anti-capitalist, and pro-government agenda, the global warming alarmists–and unscrupulous scientists who see this scare as their gravy train to federal grants and foundation money–resort to dirty tricks, smear campaigns, and outright lies, abandoning scientific standards, journalistic integrity, and the old-fashioned notions of free speech and open debate. In Red Hot Lies, bestselling author Christopher Horner–himself the target of Greenpeace dirty tricks and alarmist smears–exposes the dark underbelly of the environmental movement. Power-hungry politicians blacklist scientists who reject global warming alarmism. U.S. senators threaten companies that fund climate change dissenters. Mainstream media outlets openly reject the notion of “balance.” The occasional unguarded scientist candidly admits the need to twist the facts to paint an uglier picture in order to keep the faucet of government money flowing. In the name of “saving the planet,” anything goes. But why the nasty tactics? Why the cover ups, lies, and intimidation? Because Al Gore and his ilk want to use big government at the local, state, federal, and global level to run your life, and they can brook no opposition. But the actual facts, as Red Hot Lies makes clear, aren’t nearly as scary as their fiction.