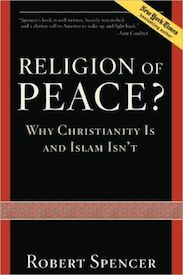 Tune in almost any liberal pundit and he’ll tell you: there is a religion that is bent on destroying our Constitution, stripping us of our liberties, and imposing religious rule on the U.S. And that religion is … Christianity! About Islam, however, the Left is silent — except to say that whatever propensity to violence that “great religion of peace” may have is more than matched by Christianity. But are such assertions true? Could the global threat of Islamic terrorism really have arisen in a Christian context as easily as in a Muslim one? Are conservative Christians really more of a threat to free societies than Islamic jihadists? Is the Bible really “just as violent” as the Qur’an? In “Religion of Peace? Why Christianity Is — and Islam Isn’t,” bestselling author Robert Spencer not only refutes such charges, but explains why Americans and Europeans must regain an appreciation of our Christian heritage if we can ever hope to defeat Islamic supremacism.

Though Spencer is a Christian, he writes not to proselytize, but to state a fact: Christianity is a true “religion of peace,” and on it Western civilization stands. Islam is a religion of the sword with more than 100 million active jihadists seeking to impose sharia not only in the Islamic world, but in Europe and the United States. And they will succeed, warns Spencer, if Westerners continue to delude themselves that Western civilization is uniquely responsible for the evil in the world, that Christianity is just as inherently violent as Islam, that all religions are equal in their capacity to inspire magnanimity, nobility, generosity, and greatness of soul. In Religion of Peace?, he calls for a grand alliance of Christians, Jews, Buddhists, Hindus, atheists, and all other victims and potential victims of the global jihad — an alliance centered around the values that the Judeo-Christian tradition has given the world.

Why the most determined enemies of Western civilization may not be the jihadists at all — but the Leftists who, at a time of peril from global jihad, think the chief danger comes from their churchgoing neighbors

How Christianity and the Jewish tradition from which it was born are at the heart of Western civilization — while Islam is hostile to it, historically and theologically

“Love your enemies” vs. “Be ruthless to the unbelievers”: the radical differences between Islamic and Christian teachings about warfare against unbelievers

Western immorality vs. Islamic Puritanism: is the Islamic world really more moral than the West?

The consequences of this for the development of science, technology, and even politics

The Crusades: just like present-day jihad? Why, in fact, they were a centuries-late and small-scale response to Islamic conquests that overwhelmed half of Christendom

The myth of a “Christian theocracy” movement that seeks, Taliban-like, to crush Western freedoms

Why, in order to defeat the jihad, we must stand up proudly for our Judeo-Christian civilizational heritage

“Brilliantly written and argued, Religion of Peace is the perfect book to give liberals who fervently believe that Christianity is as dangerous — if not more dangerous — than Islam.” — Ann Coulter

“This is a long overdue, in-depth refutation of the Islam-is-a-religion-of-peace tommyrot. Spencer also cogently explains why Jews and Christians need to stand together against the growing menace of a creed that targets adherents of both faiths.”—Don Feder, writer and media consultant

“If you are sick of attacks on the West, tired of Judeo-Christian-bashing, and unwilling to succumb to jihad-friendly propaganda, buy this book and spread the word. Robert Spencer’s latest salvo–careful, thorough, and meticulously researched as always–offers a crash course comparison of the history and teachings of Christianity and Islam. Conclusion: ‘No, Virginia, not all religions are equal.’ Armed with facts and fearlessness, Spencer stands up for Western civilization. How about you?”—Michelle Malkin, bestselling author

“Robert Spencer’s meticulously researched and powerfully argued book counters the moral equivalence arguments that attempt to excuse or divert attention from the actions of radical Islamic jihadists by attacking Christianity, Judeo-Christian civilization, and the West. In Religion of Peace? Spencer critically examines the history and teachings of Islam, the history of Muslim anti-Semitism, and Muslim views of Christianity, and in so doing helps us better understand the ideological background of the anti-Semitic and anti-Western hatred and violence that the Islamic jihadists espouse. Spencer’s thought-provoking book persuasively demonstrates the ways in which Western civilization, rooted as it is in the Judeo-Christian tradition, is profoundly different from the model of society dictated by Islamic sharia. Rich in its insights and analysis, this is a book that should be read and appreciated by Christians and Jews alike.”— Rabbi David G. Dalin, author of The Myth of Hitler’s Pope