Rich Nation/Poor Nation: Why Some Nations Prosper While Others Fail 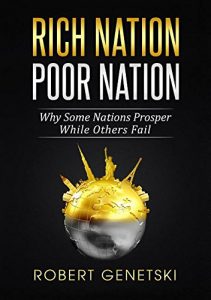 Have you ever wondered what makes a nation prosperous — and, in particular, what makes America so wealthy? Dr. Robert Genetski breaks down our nation’s economic history and compares it to the rest of the world in Rich Nation/Poor Nation.

The crux of Genetski’s argument rests in the idea that policies restricting or allowing for economic freedom have been the primary factor in whether or not a nation is prosperous. He places his book in the canon of Milton Friedman and Adam Smith — that is to say, on the side of capitalism and free enterprise.

Before Genetski goes into his case-by-case analyses, he defines wealth both for the benefit of readers and to help establish his broader case for economic freedom. Right in the 2nd chapter, Genetski defines wealth as “the value of goods and services originally created to meet the demands of others.” This impersonal definition serves as the bedrock of the rest of his arguments, focusing on the wider economy rather than on personal wealth. Furthermore, this big-picture view of wealth serves as a way to focus on large-scale social programs and state attitudes towards enterprise rather than being bogged down in the various ways individuals obtain and use their money.

Chapter 3 is spent explaining how wealth is created, and Genetski takes care to explain that technology or government intervention are not, contrary to popular belief, the main causes of wealth creation. Genetski clearly points out the central flaw of government intervention — that the private sector is the sole original source of all wealth, from business owners who provide goods and services to workers that earn money and pour it back into the economy at large. Conversely, Genetski points out that state monopolies on businesses lack the profit motives necessary to stay efficient, buoyed by the state’s power over taxation and protected from the failure that would await a badly-run private business. These two points make clear that freedom from the state is necessary to produce wealth — freedom from those inefficiencies and freedom from having created wealth taken away to fund state programs.

The rest of the book is spent comparing the titular rich and poor nations, mainly focusing on America’s modern economic history. Genetski sets America apart as a nation founded on principles of economic freedom, and uses that distinction to point out that our periods of government intervention directly caused resulting periods of poverty and economic decay.

The argument for freedom is cemented, however, not by the chapters on America but by the chapters on the wider world. Singapore and Hong Kong are great examples of how free enterprise can make resource-poor city-states into global hubs of capitalism. The chapter on Russia is also particularly illuminating, as the total failure of central planning in the USSR is laid bare, showing just how capitalism won the Cold War.

Although the book is full of economic theory, it is also highly accessible to readers of any stripe, worded clearly and concisely. Combined with the data Genetski provides to prove his arguments, Rich Nation/Poor Nation sets out a case for economic freedom that anyone can understand.