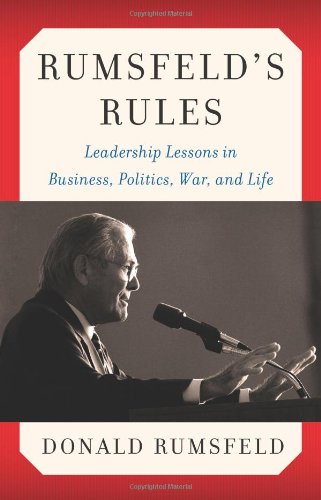 Throughout his long and distinguished career—as a naval aviator, a U.S. Congressman, a top aide to four American presidents, a high-level diplomat, a CEO of two Fortune 500 companies, and the only twice-serving Secretary of Defense in American history—Donald Rumsfeld has collected hundreds of pithy, compelling, and often humorous observations about leadership, business, and life. When President Gerald Ford ordered these aphorisms distributed to his White House staff in 1974, the collection became known as “Rumsfeld’s Rules.”

First gathered as three-by-five cards in a shoebox and then typed up and circulated informally over the years, these eminently nonpartisan rules have amused and enlightened presidents, business executives, chiefs of staff, foreign officials, diplomats, and members of Congress.  They earned praise from the Wall Street Journal as “Required reading,” and from the New York Times which said: “Rumsfeld’s Rules can be profitably read in any organization…The best reading, though, are his sprightly tips on inoculating oneself against that dread White House disease, the inflated ego.”

Meanwhile, the collection continued to grow as Rumsfeld added new rules derived from things he read, heard, or observed in more than eight decades of a remarkable life. Now these legendary rules are made available for the first time to corporate executive. Rumsfeld has selected his most useful and important rules for effective leadership, enhanced with fresh insights and entertaining anecdotes, and discusses them in the blunt and witty style that made his Pentagon press conferences “must-see TV.”

Distilled from a career of unusual breadth and accomplishment, and organized under practical topics like hiring people, running a meeting, and dealing with the press, Rumsfeld’s Rules can benefit people at every stage in their careers and in every walk of life, from aspiring politicos and industrialists to recent college graduates, teachers, and business leaders.

The book provides unprecedented insight into leadership, management, strategy, and life—thinking that not only helped Rumsfeld lead the Pentagon in wartime, but earned him a reputation as one of America’s toughest and most effective CEOs.