Shame: How America’s Past Sins Have Polarized Our Country 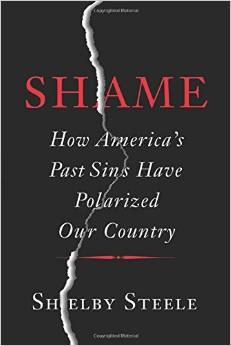 In his work, Shame: How America’s Past Sins Have Polarized Our Country, Shelby Steele offers an engaging and compelling interpretation of how the revolutionary changes of the 1960’s devolved into the fractured, suspicious and self-loathing culture that vexes American society today.  As he unfolds his narrative, Steele deftly integrates autobiographical experiences with relevant theoretical analysis. The result is a thought provoking work that explains much about cultural and racial rhetoric in modern America.

Steele contends that the civil rights movement as originally envisioned by leaders like Martin Luther King Jr., was conceived as an exercise in classical, Jeffersonian, liberalism which focused on individual rights.  It was a response both to the legally imposed segregation of the era, and the culturally driven racism found among much of the white population.  Of the two, the more easily dismantled was the legalized segregation.  Laws requiring racial separation could be repealed or struck down by the courts.  Other laws, forbidding discriminatory practices and placing American citizens on a legally equal footing, could be enacted.  What is often overlooked today is that this was eventually accomplished.  Had matters stopped there, much of the culturally driven racism would have faded away over time, and much of the division over racial issues in society would have ended.  The best policy, in other words, would have been to place all individuals upon an equal basis, and let events then take their course.

Unfortunately, the happy ending of individual freedom and equality was not the end of the tale.  More radical forces demanded other changes, and systematically dismantled ideas of patriotism, nationalism, and shared culture throughout the 1960’s and 1970’s.  At the same time, ideology, a division between right and left, replaced a unified concept of “American” identity.  The result, Steele argues, was a vicious cultural war in which contending political viewpoints sought to defeat their opponents and to impose the “correct” viewpoint upon the nation.

The result for racial relations was catastrophic.  Members of minority or ethnic groups, who had indeed suffered from disabilities and insults in the past, were encouraged to exercise a perpetual sense of grievance.  This sense of outrage could only be maintained by insisting that racism pervaded all elements of society and could not be eradicated, except by the removal “privilege.”  Evil was no longer confined to specific individuals or laws, rather, America itself was incorrigibly wicked.  Steele describes this concept as ‘characterological evil.’ He argues that the general acceptance of the idea of characterological evil was what radicalized the left in America, and continues to drive demands for radical change to this day.  Once one accepts America as fundamentally evil, efforts to reform portions of society, make no sense.  Only systematic destruction and reconstruction of such a society will have any impact.

Any wide-spread sentiments of categorical evil would very likely be rejected by any psychologically healthy majoritarian culture.  Consequently, radical theoreticians (many of whom found employment in schools and universities) turned their attention to developing feelings of generalized guilt amongst the white population. To be a white American, in other words, was to be a member of an oppressive ruling class.  Over time, other grievances and other aggrieved groups appeared to contend for the privileged status of debility.  The suggestion that individuals could be equal and could rise through their own efforts was quite discarded.

Steele contrasts this tale of woe with his own experiences, which he relates with great wit and charm.  His initial experiences with racism in school, coupled with exposure to the early radicals of the 1960’s, left him well down the path so familiar today.   However, early trips to Algeria, Nigeria and Senegal, where the success of Third World revolutionaries had done much to destroy both the material culture and the individual initiative of the people.  This was a disillusioning discovery for Steele, who decided that while he was (then) still on the left, he was no revolutionary. The appearance of Ronald Reagan on the political scene helped Steele complete his journey towards conservative thought.  Steele relates how he found Reagan’s optimistic emphasis on individual drive and accomplishment to be exactly the tone required.

On the whole, Shame is a profound work, and considering recent events, quite timely.  Steele’s analysis of the intellectual history of the United States over the past half century provides a cogent explanation of the cultural and racial divisions that afflict the country today.  Thoughtful readers interested in the problems of American society can profit by careful consideration of his ideas.