Conservative Book Club » Faith & Family » A Simple Government: Twelve Things We Really Need from Washington (and a Trillion That We Don’t!)

A Simple Government: Twelve Things We Really Need from Washington (and a Trillion That We Don’t!) 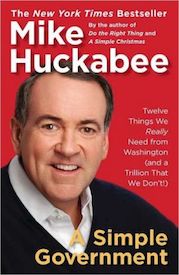 Mike Huckabee surprised the experts in 2008 by finishing second in the Republican primary with little money and a single message – the need to return to America’s values. “A Simple Government” provides his roadmap to the restoration of the American dream. It starts with strengthening the family. Huckabee believes that the American government should pass laws to encourage strong traditional families, not weaken or redefine them. Research shows that simple things like eating together make a big difference in a child’s success in later life.

Secondly, we have to quit spending more money than we have. Huckabee provides a very effective series of graphics to show just how much a trillion dollars is. As he points out, it is not an income problem, it is a spending problem. At the same time, he believes we have to change and simplify our tax system. (if you doubt that, take a look at some of the formulas in the tax code for figuring your tax liability. When CPAs have to use computer programs to determine your taxes, something needs to be changed). He favors a fair tax, which is actually a national sales tax – a tax on consumption rather than income. Since the tax code is also used to encourage certain behaviors like home buying and charitable giving, I am not sure it would work and suspect that if such a tax were passed it would become another source of revenue added to the income tax.

Huckabee also has chapters on health care reform, which makes far more sense than Obamacare, education reform, common-sense environmental protection that allows for the development of our natural resources, and immigration reform, which begins with securing our borders and does not provide for blanket amnesty.

There are also three chapters dealing with the war on terror. Huckabee believes that a strong, consistent policy against terrorism that identifies our enemies the Islamic terrorists and their attacks as acts of terror, not “manmade disasters.” While he stops short of profiling, he advocates a system that is more directed toward security and less by political correctness. He believes we have to support the military, give them the tools to do the job and define clearly what their mission is. Apologizing for previous American behavior and refusing to deal with our adversaries and enemies with strength is a mistake. It invites contempt, not friendship. No matter what we do, Iran, North Korea, Russia and China are not going to like us. Trashing our friends and allies like Israel and Great Britain only weakens our national security.

Huckabee ends his book with a chapter on hope – hope for the future. He believes as I do that we are an exceptional nation and if we return to our traditional values (Huckabee compares them to the boundary markers that guide people from place to place), we will be on the right path to restoring our nation. A major component of this is the realization of our Christian heritage.

Written in an informed and often folksy style, “A Simple Government” is an entertaining and often sobering book. Filled with stories and observations to illustrate his points, it is an enjoyable read. Sometimes we think that today’s problems are so complex they take complex answers, when simple, common sense solutions are often the best way. If nothing else, “A Simple Government” is a starting point and probably also for Huckabee’s next bid for the presidency.

Review from the Bowling Green Daily News, by J.W. Thacker