Stand For Something: The Battle for America’s Soul 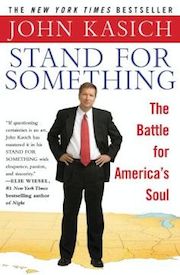 Kasich writes the way he speaks on his Fox News talk show. This former Ohio Republican congressman addresses the nation’s lack of moral fiber in his latest book (after Courage Is Contagious). America has abandoned “honesty, integrity, personal responsibility, faith, humility, accountability, compassion, forgiveness,” he laments, and the result is both a lack of leadership and “profound societal drift.”

Kasich decries the ruination of government, sports, business, religion, education and popular culture. But unlike many other conservative talking heads, Kasich takes a more conciliatory than bitterly partisan tone. He praises liberal Democrats for their steadfastness and decency—if not their programs—and deplores the increasing divisiveness of partisan politics.

When discussing national political debates, especially as they play out in the oversimplified red state–blue state split, Kasich writes with insider knowledge (he served in Congress for 18 years), but his sermonizing cultural commentary that makes up half the book lacks that authority. “I’m not a moralizer,” he writes, as he details his horror over a Roots CD and the Coen brothers’ movie Fargo, which he harassed Blockbuster to ban from its shelves. Family values proponents will find their views confirmed in this call for personal accountability.

Tags: John Kasich, Stand For Something: The Battle for America's Soul