Conservative Book Club » Humor & Popular Culture » Stonewalled: My Fight For Truth Against the Forces of Obstruction, Intimidation, and Harassment in Obama’s Washington

Stonewalled: My Fight For Truth Against the Forces of Obstruction, Intimidation, and Harassment in Obama’s Washington 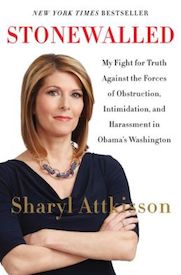 A respected investigative journalist perceived as having a political chip on her shoulder when she left CBS reveals a deeper story.

With more than 30 years in broadcast journalism, Attkisson has received five Emmys and an Edward R. Murrow Award for her work. She makes the claim that she was as doggedly the scourge of Republican administrations as Democratic ones. But with unrelenting coverage of the flubbed healthcare.gov rollout, Benghazi, the federal Bureau of Alcohol, Tobacco, Firearms and Explosives’ Operation Fast and Furious, the flawed gun-running operation, the author argues that the convergence of a thin-skinned Obama administration’s reaction to her work and “skittish,” liberal ideological news managers at CBS made the climate for her investigative work untenable. (She goes so far as to say that Evening News with Scott Pelley executive producer Pat Shevlin “sometimes had a difficult time grasping complex stories.”)

Finding it increasingly difficult to get her segments aired as she conceived of them, Attkisson eventually negotiated a departure from the network—but not before a long, mysterious bout of sophisticated hacking of her computer occurred (the author intimates in the book that someone inside the federal government is responsible and her telling of the hacking makes for thrilling reading). The fact that Attkisson joined the staff of the Daily Signal, the news site funded by the Heritage Foundation, after leaving CBS may indicate she’s conservative by nature, but she doesn’t blindly repeat Republican talking points. Instead, she’s more concerned that politicians on both sides of the aisle often forget that they serve everyday citizens rather than the rich and powerful. “[The politicians] think they own your tax dollars,” she writes. “They think they own the information their agencies gather on the public’s behalf. They think they’re entitled to keep that information from the rest of us and…they’re bloody incensed that we want it.”

A deep, nuanced and indignant indictment of the players who have made investigative journalism harder to conduct, even if those actors are other journalists.