Taking a Stand: Moving Beyond Partisan Politics to Unite America 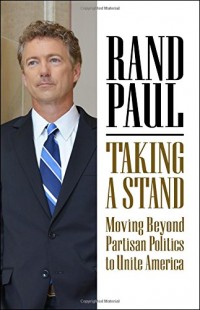 In the years after President Obama’s 2012 re-election, Republicans across America began the arduous task of reorganizing their scattered party. Where did they go wrong? What weaknesses and mistakes led to another loss for the GOP?  In his new book promoting his 2016 presidential campaign, Sen. Rand Paul offers a refreshing perspective as he details the challenges facing the Republican Party, offering unique libertarian-leaning points of view and utilizing his life experiences, primarily as a physician.

Paul begins by immediately setting himself apart from the other candidates. He comments that he is not, and has no desire to be, a traditional, “crusty” Republican. While the long tradition of the Republican Party has contributed many great ideas and policies to the American people, Paul attributes the “stuffy, stifling” reputation of current Republicans to their perceived intolerance and insensitivity which alienate minorities, independents, and low-income families.

In his own words, Paul states, “I’m not for instance, the carbon-copy conservative of your grandfather’s GOP… I believe that the GOP brand is broken, that many young people and many people of color simply won’t even consider voting for or becoming a Republican. It’s time for change, and the first part of changing is admitting your mistakes.”

Paul believes in the simple principle that the best idea wins – no matter the party tie. Despite political differences, Paul prides himself on his ability to reach across the aisle. Paul perhaps says it best when he comments, “If you’ve got a good idea, I consider it…I’ve sided with Democrats on civil liberties, and I’ve sided with Republicans on economic liberties. I’ve sided with Independents on reforming our criminal justice system…I’m predictably unbiased, and I consider that to be an asset.”

In perhaps one of his most controversial policies, Paul aims to implement term limits for senators and Congressmen. He believes this would bring back accountability to the seemingly stagnant Congress. While this is somewhat controversial, they remain unappealing to those who believe that term limits would only further inefficiency in Congress.

Paul also proposes grand social changes within the criminal justice system, including throwing out mandatory minimums for nonviolent crimes, rather than a “one-sized-fits-all” policy that leads to so many injustices and over-crowded prisons. Released prisoners who committed nonviolent crimes would be afforded the right to vote again, while promoting positive integration back into citizenship.

Essentially, Paul likes to think of himself as a “disruptive” force in politics.  While his ideas are bold, one can’t help but wonder if they are too bold. America needs change, yes, but too much change too quickly may be overwhelming to the American people. As our Founding Fathers intended, the Constitution was crafted in such a way that would limit rapid change. The purpose of this, of course, is to protect the people from an overly imposing government. With the number of changes Paul has in mind, he has the potential to alienate his own party, and stands a small chance of moving hard-core republicans away from their set opinions.

Still, Paul maintains a commitment to liberty and justice, and bringing freedom to every American. It is his compassion, and real-world experience that have the potential to attract the support of minorities and low-income families, as he is trying to present himself as the “every day man.” He certainly maintains a staunch dedication to the Constitution, and brings a sense of integrity, reliability, and famous American determination to the 2016 campaign.