Taxifornia 2016: 14 Essays on the Future of California 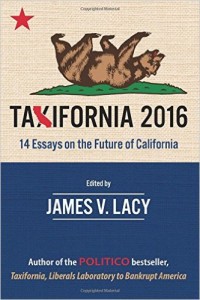 “When James Lacy talks California politics – conservatives should listen! Taxifornia 2016 is an insightful look into specific public policies and why they are hurting the state of California.” — Hugh Hewitt, nationally recognized political commentator.

Taxifornia 2016 is a collection of 14 essays authored by a dozen prominent conservative and libertarian writers on the future of California. Understanding that liberal Democrats and their public employee union allies wield great control on state policy, these writers see California in deep crisis and in need of reform, and tackle the state’s problems in 2016 with an eye toward new solutions that are faithful to the transformational value of limited-government and personal freedom.

This book exposes the truth about California’s problems and offers detailed common-sense solutions to fix them.

About the Editor and Contributing Authors:

Editor and principal author of “Taxifornia 2016: 14 Essays on the Future of California ” is JAMES V. LACY, a frequent guest on Fox Business News Channel’s “Varney & Company,” whose first book “Taxifornia, Liberal’s Laboratory to Bankrupt America” was a Politico.com best seller.  Lacy is a third generation native Californian with degrees from USC and Pepperdine Law School.  He was a delegate from California to the 1976 Republican National Convention for Ronald Reagan, served as an aide to Howard Jarvis, the author of Proposition 13 in 1978, and worked in the Reagan Administration in Washington, D.C., all eight years, including as a senior executive at the Commerce Department and as General Counsel to the U.S. Consumer Product Safety Commission.  He served as Chairman of the Planning Commission and City Council Member in Dana Point, where he resides with his wife, Janice, manages a law firm and political communications business, and is publisher of the California Political Review at www.capoliticalreview.com.  Lacy has received a “Pollie” award from the American Association of Political Consultants.
Contributing authors also include Floyd Brown, President of the Western Center for Journalism; Brian Calle, Opinion Editor of the Orange County Register; Joel Fox, former President of the Howard Jarvis Taxpayers Association and Publisher of www.foxandhoundsdaily.com; investigative journalist Katy Grimes, a Senior Correspondent for www.flashreport.org; Chris Reed, who has been an editorial writer for the San Diego Union-Tribune since 2005; John Hrabe, who publishes www.CalNewsroom.com; Michelle Moons, who writes for Breitbart California; Shawn Dewane, an elected director of the Orange County Water District; Ben Boychuk, associate editor of the Manhattan Institute’s City Journal; Stephen Frank, editor of California Political News and Views; Jon Fleischman, Publisher of www.flashreport.org; and Thomas A. Fuentes, Jr., an official of the Republican Party of Orange County.