The Tea Party Goes to Washington 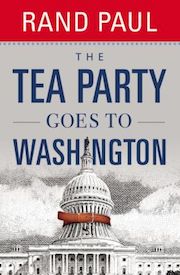 Last year, Details magazine published a picture of Rand Paul eating lunch with his family the day Kentucky Republicans nominated him for the U.S. Senate. The accompanying article described an “infamous wing nut.” Mr. Paul’s youngest son, Robert, was concerned. “Why are they calling me a lunatic?” he asked his mother. Mrs. Paul assured him that the wing nut in question was his father. “I don’t know,” Robert replied. “I’m the one eating wings!”

Tea Party conservatives like Kentucky Republican Sen. Rand Paul are often vilified as lunatics, conspiracy theorists, ignoramuses and worse. In “The Tea Party Goes to Washington,” Mr. Paul – with the help of columnist and radio host Jack Hunter – counters this hateful caricature with a book that is fact-filled, economically literate and frequently charming.

Rand Paul faced an arduous path to the Senate. The Republican establishment in both Kentucky and Washington pulled out all the stops to beat him. His primary opponent compared Mr. Paul to Rev. Jeremiah Wright and claimed he thought the Sept. 11, 2001, terrorist attacks were somehow justified. Dick Cheney, Rudy Giuliani and Senate Minority Leader Mitch McConnell all endorsed Mr. Paul’s opponent – only to watch him win in a 59 percent “Randslide.”

History repeated itself in the general election. Mr. Paul’s Democratic opponent questioned his Christian faith and ran television ads darkly warning that the Republican had worshipped “Aqua Buddha” (whether that was an actual deity, a Thai restaurant or brand of aftershave lotion was never made clear). Mr. Paul was portrayed as a dangerous radical who wanted to legalize racial discrimination against blacks and expose mine workers to even greater safety risks. He won with 56 percent of the vote.

Electing a Bowling Green ophthalmologist with no prior government experience over the near-unanimous opposition of the political class may have been the Tea Party movement’s biggest victory at the ballot box yet. Since coming to Washington, Mr. Paul has so far failed to disappoint: He has introduced $500 billion in spending cuts in a single year; he has proposed ending birthright citizenship for the children of illegal immigrants; he has insisted that senators be required to read the bills they vote on; he has pushed for balancing the budget and auditing the Federal Reserve.

While “The Tea Party Goes to Washington” contains many disarming personal vignettes like the wing nut story, it is mostly a beginner’s guide to the thoughtful constitutional conservatism that animates the best elements of the Tea Party movement. For years, there have been well-funded constituencies that cry out against cutting the spending programs and closing down the government agencies that benefit them. Finally, there is a sustained revolt by the taxpayers footing the bill, demanding that spending be cut and agencies be shut down.

“My father has always said that we wouldn’t have all these problems if our leaders would simply do what they swore to do, and just follow the Constitution,” Mr. Paul writes. “He’s right.” That father is Ron Paul, the Texas congressman and 2008 Republican presidential candidate whose passionate grass-roots supporters gave Rand Paul his start. But Rand has reached out beyond his father’s backers. The elder Mr. Paul received just 7 percent of the vote in Kentucky. The younger Mr. Paul won by comfortable margins and collected endorsements from mainline Republicans like Sarah Palin, James Dobson and Steve Forbes.

A Politico survey conducted last year listed Mrs. Palin and the elder Paul as the Tea Party’s two most admired politicians. Rand Paul has emerged as a bridge between these two camps. In his book, the senator tries to ground conservative discontent with excessive federal spending in Austrian economics and a strict interpretation of the Constitution.

Yet Rand Paul does occasionally rock the boat in much the same way as his father. He was one of just two Republicans in the Senate to vote against extending the Patriot Act. In his book, he repeats his opposition to the Iraq war and questions the need to remain in Afghanistan a decade after scattering al Qaeda in response to Sept. 11. In his foreign policy chapter, Mr. Paul stresses the need for a strong national defense but complains, “Many Republicans treat war like Democrats treat welfare.”

When it comes to trimming the federal budget, Mr. Paul insists that Republicans should leave no stone unturned: entitlements, the Pentagon and domestic discretionary spending. All existing spending commitments should be reevaluated for effectiveness, fiscal sustainability and constitutionality. And while he pays homage to Republican stalwarts like Robert Taft, Barry Goldwater, Ronald Reagan and his father, Mr. Paul acknowledges both parties are to blame for the country’s dire financial situation.

In Rand Paul’s telling, the Tea Party is not a rabble, but a force for responsible government. That’s a story still being written in legislative halls throughout the country.