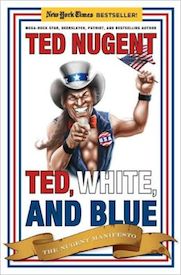 You don’t have to be fan of rock music to love rocker/hunter Ted Nugent. You just have to share the unabashed patriotism and “rock”-solid conservative values that come through in his music(over 30 million records sold) and bestselling books (including God, Guns, and Rock ‘N’ Roll and Kill It & Grill It, his wildly successful cookbook).

Now comes the Motor-City Madman’s wildest, most politically incorrect book yet. In Ted, White, and Blue: The Nugent Manifesto, “The Nuge” lays out his plan for defending red-blooded, full-throated Americanism against pantywaist politicians, nanny-state judges, and tofu-eating Obamamaniacs — calling on readers to “Roll up your damn sleeves, sharpen your crowbars, and think hardcore.”

“Some are attracted to Ted Nugent for his lifestyle of conservation management, others for his political courage, and many more for his rock ‘n’ roll. For me, it’s all three. Nuge has had me in a stranglehold for years, and his musings in Ted, White, and Blue will keep me on his tour bus for many more.” — Michael Smerconish, Philadelphia’s number one radio talk show host

“Ted Nugent is the closest thing to a human tornado

I’ve ever met. He lives life at mach speeds, boldly pouring himself into matters deeply personal to him. His efforts to support U.S. troops wounded in the defense of freedom and his selfless devotion to children with life-threatening illnesses are just two indications of the gentle heart that beats beneath the surface of this wild-eyed warrior. His story is as American as rock and roll and as inspirational as Horatio Alger. I hope Ted, White, and Blue opens your eyes to the challenges of our times and the limitless opportunity in our country. I pray it encourages you to live life boldly and in the spirit of the wild! — Governor Rick Perry