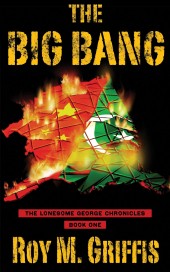 If they do nothing else and shut down tomorrow, the Liberty Island literary website crew deserve love for digging up novelist Roy M. Griffis, a subtle and witty talent who has been writing into a black hole for thirty years. With his skill at creating addictive, empathetic characters and then nailing them between the eyes exactly when you would least like him to do so, he’s like a less nudist George R.R. Martin for the historical fiction and alternate history genres.

Griffis began writing as a teenager. By his 30s he’d given up on selling stories to magazines, with their labyrinthine rules about which viewpoints were correct for sympathetic characters to hold. He turned to screenplays. But screenplays introduced him to even more of what he calls the “good-think rules” for media. When working on a history piece set during the Korean War, Griffis was using North Korean characters as antagonists in the drama, and the producer told him: “Let me check and see if they’re okay.”

So after burning his 30s bashing his head against the wall of creation by committee (or, as he calls it, “death of a thousand revisions by a committee of non-writing MBAs”), Griffis came late to the novel. But he barreled out of the gates, spending the last five years writing not two books but two series of books back-to-back, both of which were mostly ignored till Liberty Island came along.

“The clarity and mastery of this scene should be enough to bury the ‘meet cute’ trope forever, but I fear the Muses will go on punishing us with that one till we’re all dead of nausea.”
Not that Griffis made himself much of a proper pest to mainstream publishers, by his own admission: “I loathe peddling myself. I resent it as cutting into my creative writing time, and I do a terrible job of it. Write a synopsis? I’d rather roll naked in fiberglass insulation.”

The Lonesome George Chronicles—the first volume of which is slated to be published by Liberty’s imprint arm by the end of the year—tell Griffis’s alternate history of the current jihad. In 2008, the United States is boarded, looted, and subjugated by a Taliban-esque pirate state (the name in the book is changed to Caliban, perhaps to avoid trademark infringements, or to evoke Shakespearean wrath). As the shreds of the American government fight to keep contact with each other, the population is transformed overnight from iPhone zombies into either plague-infested corpses or slap-happy militiamen.

The By the Hands of Men series, a more traditional historical tale, was written after Lonesome George, but its first volume is already available via self-publishing. The Old World begins in the gory hell of a World War I military hospital, where the narrative unexpectedly blossoms into a love story that celebrates virtue without always rewarding it. As it bears the “vanity press” stigma and lacks publicity, sales have been as grim as you’d expect.

It’s clear enough that the “Lonesome George” series was Griffis’s first stab at novels: he does some things that show his hand as an author with no hope of going far. He uses real people—public figures like Alec Baldwin, G.W. Bush, and Molly Ivins—as characters, which says to me he doesn’t even expect to be in a position to be sued. It’s not as though they’re cruel, dehumanizing caricatures such as the cardboard rednecks that mainstream entertainment trots out, but you never know who’s going to sue, once they notice you.

Being able to write like lawyers don’t exist is one of the freedoms of being underground. But who wants to be stuck with a boutique audience forever? On the other hand, if Griffis were thinking too much about this stuff, we’d be robbed of delightful scenes like Molly Ivins screaming at a prisoner who’s about to be beheaded by the jihadists that it’s moronic to blame George Bush for the fact that fanatics hate everyone.

As characters, Griffis lends Bush and Ivins both more courage and common sense than I would have previously imagined; but historical writers worth their salt are of excellently generous mind. The generosity gives all of his characters extra dimension.

Griffis has little patience with less expansive writing techniques, even more so if they’re the fashion du jour. “I’ve got so weary of lazy left-wing writing. In novels, one of my favorite whipping boys is Stephen King. How many times can he use the ‘magic negro’ trope?” King’s Christians are all shorthand lunatics and traitors to humanity. “At a certain point, an observant reader might ask, ‘How goddamned lazy does this writer have to be? Can’t he even conceive of a black Democrat taking bribes? A member of the Green Party who is quite happy to kill to protect Gaia?’

“Almost the surefire sign of intellectually and creatively bankrupt writing is Christian bashing. I’m more of a cultural Christian—my faith journey is a whole ’nother story—and my objections to it are less ‘That offends my faith, amorphous as it is,’ and more ‘Jesus Christ, couldn’t they find a more interesting and original way of saying that?’”

Writers and producers are less interested in invention than in proving what Griffis calls their “Kool Kids Kred” with easy mockery; a recurring theme of his is the stupid cruelty of cool. “As a writer, when I encounter this stuff, it offends me: Somebody got paid to write this shit?”

He doesn’t think his colleagues at Liberty Island are doomed to be a reverse image of the literary mainstream. Their ideal is something less creatively bankrupt. Griffis uses Jamie Wilson’s “Biscuit Boy”—in which buyer’s regret over an abortion goes horribly weird—as an example. “The worldview or Jamie’s personal feelings were an organic part of the story,” says Griffis. “They were not jammed in as lazily and predictably as the ‘dusky skinned villain’ would have been in the pulps of the 30s—and as people of faith and conservative values are in today’s junk.

“I suspect many readers are just looking for good stories that don’t, along the way, suggest they are stupid racist sexist haters of the Earth and all that is good and right for holding certain beliefs, faith practices, or values.”

The Hands of Men series particularly excels at good yarns with good characters. When the protagonist of the first volume, a World War I nurse named Charlotte Braninov, meets the love interest—known at first only as “her knight”—it’s her first day at a CCS, or casualty clearing station, the makeshift medical bloodbath just behind the trenches where the mangled warriors are first brought for death or triage. Circumstance, as it does to most of Griffis’s characters, shakes Charlotte’s faith in God and man to the core.

And yet the heroine and her knight never waver in their faith in cordial reserve, civility, and the mutual admiration of chivalry. Robert Fitzgerald is the officer with a broken arm who calmly helps her hold a soldier’s severed artery together while she performs her first surgery in the absence of a doctor. The clarity and mastery of this scene should be enough to bury the “meet cute” trope forever, but I fear the Muses will go on punishing us with that one till we’re all dead of nausea.

The themes in Lonesome George are more overtly political. Since we still have dogs in that fight, it’s hard to look at modern jihads sub specie aeternitatis; it would be too superhuman, in fact, to be literary. But Griffis uses the apocalypse for character development as well. As the self-imagined heroism of political warriors deflates when the chips are down, the ranch hands, rednecks (including a young bulimic redneck), and gun-toting junkies spring into three-dimensional compassion as they rescue spoiled Congresswomen, blow away child molesters, and keep a light on in a dark age.