The Book of Absolutes: A Critique of Relativism and a Defense of Universals 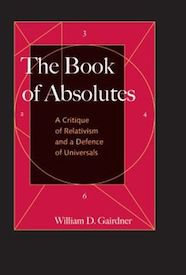 For more than a century, the citizens of the Western world have been uncritically subjected in the media, the public square, and the classroom to the idea that there are no permanent, universal truths in human life. Not only are time and space relative, we are told, but so too are moral and cultural values, principles of justice, and even biological distinctions between men and women. In fact, the only “absolute” is that there are no absolutes — and anyone who thinks otherwise is “rigid” or “intolerant.”

Now, in “The Book of Absolutes: A Critique of Relativism and a Defense of Universals,” William D. Gairdner challenges this modern dogma — demonstrating not only that relativism is logically self-defeating, but that progress in scientific and intellectual disciplines has actually strengthened the case for absolutes, universals, and constants of nature and human nature. In fact, Gairdner shows, current studies in biology, psychology and theoretical physics are uncovering new constants of human and physical nature every day; and there exist myriad demonstrable universal and abiding patterns, ideas and truths that transcend and unify all historical epochs and cultures across the world. Finally, Gairdner reveals how relativism is not only illogical and unscientific, but also dangerous — creating moral indifference to objective evil.

“A brilliant analysis of the chief intellectual pathology of the modern age. . .Writing with wit and erudition, William Gairdner goes to the heart of the defining spiritual malaise of our time, showing (among much else) that relativism and tyranny, far from being opposing forces, actually collude to undermine genuine freedom. The Book of Absolutes is sure to emerge as a modern classic of political and moral maturity.” — Roger Kimball, The New Criterion

“Not since Allan Bloom’s The Closing of the American Mind has a book come along that furnishes so many insights into the morbid mentality of a civilization that has lost confidence in its certainties and itself or that more clearly points the way up from despair. For conservative resistors, at any rate, it’s nice to see tradition and truth in the role of accuser, rather than accused, for a change.” — The Interim (Canada)

“Fifty years ago William F. Buckley wrote that the purpose of his brand new National Review magazine was to “stand athwart history, yelling Stop!” History had to be stopped, he opined, because western culture had embraced relativism as a guiding philosophy and was rushing headlong toward destruction. . . Canadian author William D. Gairdner has taken the torch from Buckley’s failing hands and lifted it high with his new work, The Book of Absolutes. . . [and by the end] an objective reader is left wondering how relativism ever got a toehold in the popular imagination in the first place.” — Shafer Parker, The Calgary Herald