The Complete Infidel’s Guide to Free Speech (and Its Enemies) 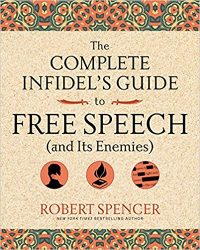 Political correctness is back and worse than ever — with speakers being shut down or threatened from Europe to college campuses across America. The opprobrium is particularly harsh when talking about radical Islam — which is why Jihad Watch’s Robert Spencer has written  The Complete Infidel’s Guide to Free Speech (and Its Enemies).

The latest Complete Infidel’s Guide takes a hard look at the hate speech laws and anti-speech riots that are popping up all over the world.  Spencer does not shy away from exposing the way that Sharia blasphemy laws are worming their way into our cultural and standing in direction violation of the First Amendment.

This book is 274 pages of stories and news pieces too shocking and crazy to be true.  The story of Elisabeth Sabaditsch-Wolff, charged with “denigration of religious beliefs of a legally recognized religion,” for quipping that Muhammad “had a thing for children” due to his consummation of marriage with a nine-year-old girl, was eye-opening. Notable academics and esteemed researchers around the world have been falling victim to hate speech laws and religious “liberty” violations simply for speaking the truth about Islam and its core tenets.

Spencer also takes an wide look at many different free speech advocates that have fallen victim to Islamic jihad violence, including murdered filmmaker Theo van Gogh. He doesn’t shy away from chastising the spineless politicians and public figures who dare to say that these victims “asked for it” by speaking the unpopular truth about Islam or radical Islamic terrorism.  Victim blaming is okay when the victim died for free speech, apparently.

Some people have been lucky so far to survive the calls for their death, including Satanic Verses author Salman Rushdie, and outspoken ex-Muslim and former Dutch MP Ayaan Hirsi-Ali.  Spencer explores their so called “affronts to Islam” and shows just how absurd it is that many governments aren’t doing their duty to protect their citizens. How could a leader allow another leader to issue a death warrant for one of its citizens, an open call for them to be murdered in cold-blood, and turn a blind eye? As Spencer reminds us, if we don’t fight hard to protect the first amendment, our citizens could be next.

While the hate speech laws haven’t come to the United States yet, college campuses around the country are attempting to enforce their own versions of these laws. That manifests as disinvited speakers, torn down posters, threatened and intimidated students, and cow-towing to the every whim of the Muslim Students Association, even by student organizations that they wish didn’t exist, like Students for Israel.

The Complete Infidel’s Guide to Free Speech (and Its Enemies) is a must-read for anyone concerned about the freedom of speech when it comes to criticizing radical Islamic terrorism. If you scratch your head in confusion at shootings over the drawing of Muhammed and lauded tax-payer portrayals of the Virgin Mary covered in dung, this book will help you understand just how far the world is straying from key freedoms, and why it is crucially important that we stand up for the first amendment in the United States, no matter the threats we face.