The Complete Infidel’s Guide to ISIS 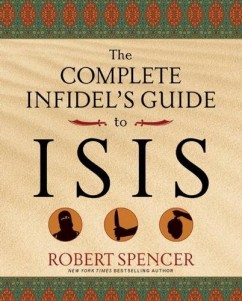 Voltaire once quipped that “the Holy Roman Empire was neither Holy, nor Roman, nor an empire”. That sentiment was meant to expose the fact that the ramshackle German-Italian state, for all of its pomp and circumstance, appropriated older states with more prestige than it could ever hope to garner on its own.

The liberal intelligentsia of the West would have you believe that ISIS is much the same — neither Islamic nor a state. This idea comes despite ISIS’ meteoric rise from the chaotic deserts of Syria and Iraq in the summer of 2014.

In The Infidel’s Guide to ISIS, Robert Spencer masterfully articulates the origins of ISIS, places it in the proper context of Islamic history and of past caliphates, and explains how the West can effectively combat this new menace. Before that victory may be achieved, however, Spencer shows us that we must call evil by its name. President Obama, master of Orwellian rhetoric, would have us believe that there is no link between the Islamic State and Islam, ignoring a great deal of history and Islamic theology in the process.

Spencer explains a way forward by comparing the Islamic world of today and Japan in 1945. In Japan, radical militarism was being driven in part by the version of emperor-worshipping Shinto believed by a majority of the Japanese. For a time, the West banned much of the teaching of this faith as a necessary precaution against future incitements to violence. In a similar way, Western powers should not fall into the trap of believing that democratic overthrow of tyrannies in Muslim states will lead to less aggression against the West. As we have seen in the wake of the Arab Spring, democracy can just as easily lead to the empowerment of radical factions preaching the purest forms of Islam.

As Spencer reveals, the problem with Islam as a force is not its abuse by an ignorant minority; it is the faithful and holistic following of the faith by a devoted and educated minority. We often assume that since most Muslims are peaceful, then the Quran must be peaceful as well.

However, a serious and scholarly reading of the Quran, the Hadith (the sayings of Muhammad), and Islamic jurisprudence underpin the most “radical” elements which are proving so dangerous to freedom around the world.  Unlike the cases of violence committed by Christians, which can clearly be shown to be contrary to the Bible and Christian teachings, the violent act of a Muslim finds direct support from the Quran and the sayings of the prophet.

Spencer shows us that the pursuit of peace in the Muslim world and in areas of Muslim settlement must entail suppression and intellectual refutation of the core tenants of orthodox Islam. While it is tempting to stick our heads in the sand and hope for moderate Muslims to reign in their radical compatriots, the history of Islam from the first days of Muhammad has been one of unrelenting militarism and domination of the Kafir (unbelievers). Spencer provides the historical links between the past caliphates of the Islamic world and the modern movement, led by ISIS, to restore Islam’s global power.

After reading Spencer’s extensive quotations from ISIS’ statements, and reading about their remarkable ability to back these statements up with direct actions, it is impossible to see them as “the JV team”.

If the West is to weather this next great assault of Islam, we must regain our moral authority and strength of commitment to our own values. Along with this, we must give ourselves the knowledge of Islamic history and therefore the context from which this newest caliphate has arisen. There is no better place to start than the Robert Spencer’s Infidel’s Guide to ISIS.